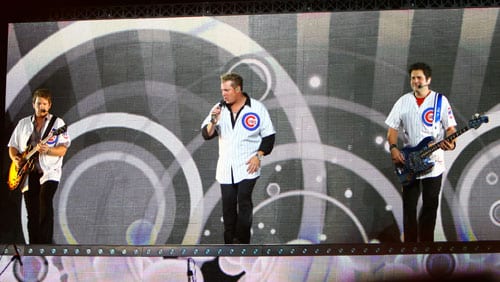 Rascal Flatts will perform their second sold-out stadium show of the summer Sunday (8/9) at Columbus’ Crew Stadium. This weekend a total of 65,000 fans are expected at the Rascal Flatts American Living Unstoppable Tour’s three stops, including Columbus, Cleveland, and Cincinnati.

Last weekend the band played a sold-out show last month in front of 37,000 screaming fans at Chicago’s Wrigley Field and became the first country act to perform a concert in the historic ballpark.

Rascal Flatts is also announcing the continuation of the tour with more dates through October. Darius Rucker will stay on board as opening act.

Rascal Flatts recently placed their fourth consecutive studio album atop the Top 200 chart with the release of Unstoppable with first week sales of 351,000 albums. It became the biggest country release of 2009 to date, and the best in country first week sales since November 2008. Since they launched their career in 2000, they have sold 20 million albums.