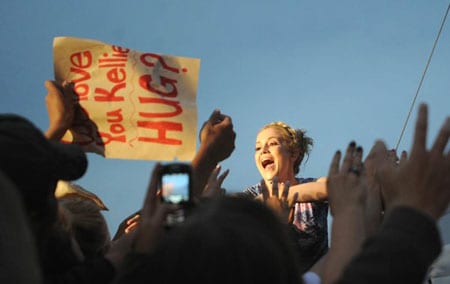 Kellie Pickler’s recent show at the Freeborn County Fair drew the highest grossing box office receipts in the event’s 126-year history. She opened the show with her Top 10 and gold certified single, “Best Days Of Your Life.” 90 minutes later with rain falling, she closed the show with “Red High Heels” and invited every young girl in the audience to join her onstage, passing the microphone around for the girls to sing with her. By the time the song ended, the stage was packed with fans singing in unison.

————————–
The Teen Choice Awards 2009 don’t air until 7 PM/CT tonight (8/10) on Fox, but Taylor Swift’s Twitter feed has been giving away some of the surprises. She posted, “Two of my best friends @therealpickler and Abigail came out and surprised me onstage tonight in Omaha. I won 2 Teen Choice Awards!! AHHH!!” and “Choice female artist and choice female album! YESSSSS!!!”

Swift, Carrie Underwood and Miley Cyrus are among the nominees for the popular show, honoring everything from music, TV, and film, to favorite athletes, celebrity babies and celeb pets.

There isn’t a Country category, so the music nominations listed here are all-genre. Swift received four nods, including favorite Female Artist, Love Song, Tour and Female Album. Underwood’s Carnival Ride is also competing for Female Album. Cyrus is one of the leading nominees, with the chance to take home 10 surfboard trophies, including one for her Country/Pop crossover single “The Climb,” which was written by Jessi Alexander and Jon Mabe.

The most nominations, 12, went to vampire teen flick Twilight and its cast. Also up for 10 awards are High School Musical 3: Senior Year and its cast, and TV’s Gossip Girl.

Donovan is set to be named a BMI Icon at the performing rights organization’s annual Oct. 6 London Awards. The gala celebration honors UK/European songwriters and publishers of the year’s most played BMI songs on American radio and TV. The Icon award indicates, “a unique and indelible influence on generations of music makers.” Other winners have included Bryan Ferry, Ray Davies, Van Morrison, the Bee Gees, Paul Simon and many more. Donovan’s hits include “Sunshine Superman,” which has earned over 3 million performances and “Mellow Yellow” which has tallied over 2 million. Other hits include “Wear Your Love Like Heaven,” “Jennifer Juniper,” and “Lalena.” BMI collects royalties for Donovan in the U.S. and he is a member of British Performing Rights Organization PRS.
————————–

Christian rockers MercyMe (Provident-Integrity) were in an accident over the weekend in northeastern Indiana, when their tour bus hit a car which turned into its path unexpectedly. Witnesses told police the bus was going through a green light about 1:15 a.m. Saturday when the car made a left turn in front of it. Two passengers in the car were killed, as well as the pregnant driver’s unborn child. The driver remains in critical condition. There were no injuries reported on the bus. The band canceled its Saturday show in St. Louis.