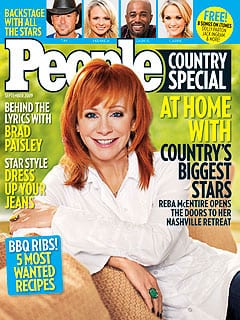 Dedicated entirely to the Country music scene and lifestyle, this edition, the third of five special Country issues to be published by People in 2009, takes readers inside the homes of Country’s biggest stars.

In the cover story, Reba McEntire opens the doors to the Tennessee home she shares with her manager and husband of 20 years, Narvel Blackstock. The 54-year-old singer also talks about the upcoming release of her 33rd album, Keep on Loving You, her first solo studio album since the new generation of females took over the charts. “Competition fuels me,” McEntire tells People Country. “I look at the charts, and I want to know where I am and whom I have to beat out. It’s more fun that way.”

Also inside: Miranda Lambert dishes on her favorite things, Tim McGraw and Faith Hill talk about their new fragrances, Jennifer Nettles counts her blessings, and Brad Paisley reveals the inspiration behind his newest single and reminisces about the first time he laid his eyes on his wife, Kimberly Williams-Paisley, when he went to see 1991’s Father of the Bride with his then-girlfriend.

Another bonus: free iTunes downloads from Jack Ingram, Dolly Parton, Willie Nelson and others. Go to www.people.com/free to get the promo code to download the free People Country playlist.