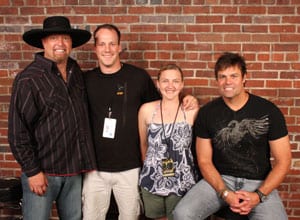 Almost 31 Million viewers tuned into Michael Jackson’s memorial service on Tuesday (7/7). It aired on 19 networks from approximately 1-4 p.m. By comparison, the most recent season finale of American Idol drew just under 29 million pairs of eyes.

—————
Copyright Office fees for various services concerning the registration of claims are increasing starting Aug. 1. The fee for online registration of a basic claim will remain $35. The registration fee for fill-in Form CO will rise from $45 to $50; however, if a faulty version of Form CO is submitted, making it necessary to process the claim as a paper filing, the fee will increase to $65. The fee for paper filings on Forms PA, SR, TX, VA, SE will rise from $45 to $65. Find a full list of adjusted fees here.

Weird but true: Buy a specially marked bags of Doritos Late Night chips, log on to http://www.doritoslatenight.com, hold the bag up to your webcam, and watch a virtual 3-D concert by rock band blink-182 and rapper Big Boi. The chip maker calls it “augmented reality technology” because the user can move the bag around to personalize each artist’s performance…. It may or may be related that Kenny Chesney recently filmed a concert in 3-D.
—————

Hear Chris DuBois talk about “Then,” the song he co-wrote with Ashley Gorley and Brad Paisley, who took it to No. 1.  It’s on AOL’s The Boot.

Teresa and Scott Siman are holding a garage sale to benefit Rüdrani Devi (aka Andi Varagona) on Sat., July 11 from 8 am to Noon at 1229 Nichol Lane 37205. Donations and volunteers are still needed. Please email [email protected] to get involved. Devi was forced to close her holistic healing clinic after being shot last year during the Mumbai Terrorist attacks.

Did you know that you can read sheet music on the Amazon Kindle? FreeHand Systems recently released its Novato Music Press catalog in the format, consisting of over 20,000 classical, traditional and American music titles.