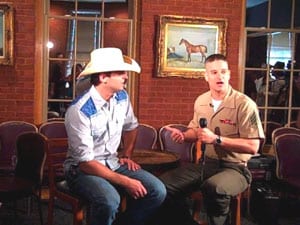 Broken Bow Records' Dean Brody will be included in "Operation Music City," a special to air on the Pentagon Channel over the 4th of July weekend. He talks about his debut single "Brothers" with Sgt. Ted MacDonald and also discusses new single "Gravity."

Here’s a list of what a few artists are doing this weekend. What is your artist up to? Add a comment below and let us know.

Nashville always celebrates the 4th of July with style and this year’s 25th anniversary event will be better than ever with headliner Wynonna Judd performing alongside the Symphony Orchestra. The Riverfront Park free festivities will begin at noon with the Family Fun Zone, presented by Coca-Cola. The NowPlayingNashville.com First Stage will feature music beginning at 2 PM with Frankie Ballard, The Grascals, MTA’s “Transit,” Lee Roy Parnell and more. The main stage concert will kick off at 7 PM with the Fisk Jubilee Singers and the Nashville Symphony Orchestra performing the national anthem, then there will be a patriotic salute by Mayor Karl Dean, followed by The Gabe Dixon Band and Wynonna. The evening will conclude with fireworks dancing to the rhythm of the Nashville Symphony at around 9:25 PM. Wynonna will also be appearing at the Country Music Hall of Fame® and Museum on the afternoon of July 4th to sign autographs from 2-4 PM. http://www.musiccityjuly4th.com/

——————————————–
Charlie Daniels, Phil Vassar and Jimmy Webb will appear on a new singer-songwriter series called Legends & Lyrics, airing Saturday, July 4 at 10 p.m. on local Nashville public television channel WNPT. The program, which debuted on May 9, pairs legendary songwriters and performers with promising new talent in an “in-the-round” writer’s format that features performances and interviews with the artists. Daniels recently returned from his third international trip to visit military troops in Iraq and Kuwait and is currently touring the U.S. through the end of 2009.

StarCity Recording artist Brady Seals visits host Harry Chapman on the set of News Channel 5+’s Words & Music this Sat., July 4 at 4:00 pm. Words & Music: The Showcase for Nashville’s Songwriters gives viewers an inside look at some of the area’s most successful songwriters and the stories behind some of their biggest hits. Seals will perform “God Blessed Texas,” a #1 single he co-wrote during his time with Little Texas, and “Ho Down,” the debut single from his upcoming solo album, Play Time.

——————————————–
Jack Records/Warner Bros. Records Comedian Larry the Cable Guy will release his first 4th Of July Special, Tailgate Party, digitally on the holiday. The digital download package will be distributed exclusively by Basecamp Productions and will be available at http://live.larrythecableguy.com. The special was taped during a unique performance at Memorial Stadium in Lincoln, NE on Independence Day in support of Husker Fans on the UNL Campus.

American Roots Records Group TelluRide will head south to Daytona Beach on the 4th of July for a performance on the Coca Cola Fan Stage prior to the Coke Zero 400 NASCAR Nextel Cup Race that evening at the Daytona International Speedway.