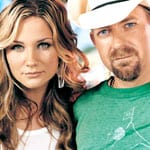 Multiple nominees Sugarland have been added to the performance schedule for this Sunday’s (2/8) 51st Annual Grammy Awards. Taylor Swift and Miley Cyrus have also joined the line-up for a special performance together. At the Awards airing live from the LA Staples Center, Sugarland is up for Best Country Performance By A Duo Or Group With Vocals (“Stay”) and Best Country Collaboration With Vocals (“Life In A Northern Town” with Jake Owen and Little Big Town). Previously announced performers include Robert Plant & Alison Krauss, Kenny Chesney, Carrie Underwood, Kid Rock, Paul McCartney, Justin Timberlake, U2, and Jay-Z.

As in years past, the Awards will be broadcast on television and radio, airing in HD on CBS from 7–10:30 PM/CT and Westwood One, respectively. For 2009, the Recording Academy has broadened online coverage to include social networking sites such as Twitter (“theGRAMMYs”), Facebook (“The Recording Academy”), YouTube (“51stGRAMMYs”) and Last.fm (“the51stgrammys”), in addition to coverage on Grammy.com and CBS.com.

The Pre-Telecast Ceremony, where a majority of Grammy categories are awarded, will also be available online at www.grammy.com on the afternoon of the show. Taking place from 1–3:45 PM/PT at the Los Angeles Convention Center, the non-televised event has grown into its own celebrated affair with guest presenters and live performances.

Other Nashville artists heading to Los Angeles for performances surrounding the Grammys include Tim McGraw, Faith Hill, and Brenda Lee. McGraw and Hill will sing at the Feb. 6 tribute to 2009 MusiCares® Person of the Year Neil Diamond. The event celebrating his artistic achievements and philanthropic work, will also feature Kid Rock and Raul Malo. Lee will receive The Recording Academy’s Lifetime Achievement Award on Sat., Feb. 7 at the Los Angeles Wilshire Ebell Theater. Also being honored are Gene Autry, The Blind Boys of Alabama, The Four Tops, Hank Jones, Dean Martin, and Tom Paxton.