Vince Gill has had a busy week. On Tuesday night (2/24) he concluded his residency at the Country Music Hall of Fame, and on Wednesday he was recognized as an honorary professor by the College of Mass Communication at Middle Tennessee State University.

At MTSU, Gill’s two-and-a-half hour conversation and performance was part of the Tom T. Hall Writers Series which celebrates songwriters, authors, poets and screenwriters by giving students, faculty, and the public a chance to learn about the underlying creative and business processes. “This honorary professorship is a recognition by our college of him as a master teacher,” said Mass Communication Dean Roy Moore. “He’s one of the best examples of true artistry: he creates, he inspires, and he shares who he is and what he does with others.” 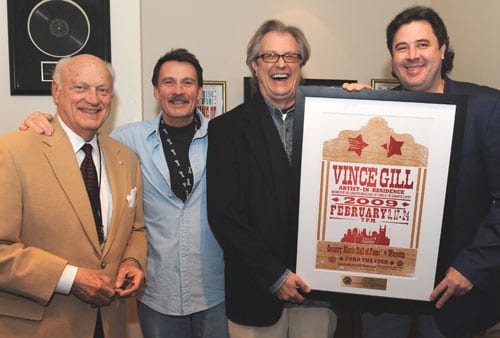 At the Hall of Fame performance (L-R): Bill Denny and David Conrad, members of the Museum’s Board of Officers and Trustees; Museum Director Kyle Young; and Gill. Photo: Donn Jones