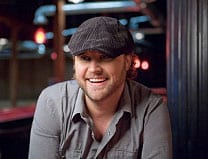 This week GACTV.com premiered the first of its exclusive webisodes featuring Universal Records South’s Randy Houser. The 8-part weekly series, titled The Road Home, follows the rising artist during a trip to his homestate of Mississippi where he visits his old school, childhood home, and the nightclub where he got his start.

New webisodes will be available each Wednesday. The first two are posted now at http://www.gactv.com.  Special acoustic performances of “Anything Goes,” and “Boots On” from his GAC studio session will be available online next week.

Houser is ramping up for CRS where he will join Heidi Newfield in performing at BMI’s show on Wed., March 4 at 12th & Porter. Doors open at 6 PM, with Newfield’s 30-minute set beginning at 6:30 PM sharp, followed by Houser immediately after. The event is free and open to the public.

Houser—currently on the Jagermeister Country Tour with Pat Green—recently released the second single from his debut album. “Boots On” is climbing MusicRow’s Country Breakout Chart.