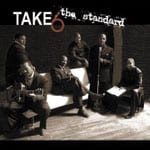 All of a sudden, there is a banquet of Nashville-oriented jazz releases on hand.

This is a growing, strong and highly gifted segment of our music community, so this week we’re throwing the spotlight on it.

There is something to recommend in every disc here. But the clear winner of the Disc of the Day award is the always amazing Take 6. Good luck at the Grammy Awards on Sunday, guys. I’m rooting for ya. 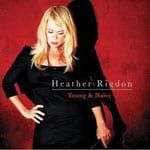 ROD MAGAHA/A Gentle Man
Writer: Jeff Steinberg; Producer: Rod Magaha; Publisher: none listed; RM (track) (www.rodmagaha.net)
—The title tune to trumpeter Magaha’s new CD is a dreamy, piano-flecked ballad. The purity of his tone is outstanding, and the phrasing couldn’t be more precise. Elsewhere on the set, he works his magic on standards like “The Look of Love,” “When I Fall in Love” and “How Long Has This Been Going On.” Rod also has a new, six-tune EP called Stand Up for Love. Both discs are enthusiastically recommended.

HEATHER RIGDON/Young & Naive
Writer: none listed; Producer: Cliff Goldmacher; Publisher: none listed; HR (track) (615-320-7233)
—The debut album by chanteuse Rigdon is called Young & Naive. From the opening notes of this title track she stakes her claim as a distinctive, off-the-beat phraser, a languid stylist and a charming, minor-key melody manipulator. Promising in the extreme.

TAKE 6/Sweet Georgia Brown
Writer: Maceo Pinkard/Kenneth Casey Sr./Ben Bernie; Producer: Mark Kibble; Publisher: Warner Bros./WB, ASCAP; Heads Up (track)
—The Nashville press corps has been practically mum about the fact that the current Take 6 CD The Standard is up for three Grammys. Just so you know, four of the six are Middle Tennesseans, the disc was recorded here and best-arranger nominee Cedric Dent teaches at MTSU. The excitement over the CD is understandable, since it is what the jazz community has been begging for from these guys for years, an album of standards. This opening track is Take 6 at its best, jiving a cappella harmonized vocals and whistling by Mark Kibble. Elsewhere, guests include guitarist George Benson (”Straighten Up and Fly Right”), Aaron Neville (”Do You Know What it Means to Miss New Orleans”) and member Claude McKnight’s star brother Brian (”What’s Going On”). I LOVE this record.

KAREN JOHNS & COMPANY/Southland Summer
Writer: Karen L. Johns/Kevin Sanders; Producer: James Johns & Karen Johns; Publisher: Vital Force, ASCAP; PtarmiganMusic/Jazz (track) (www.karenjohns.com)
—Star and Season, the new CD by Nashville club fave Johns and her band, is a mixture of standards (”Stars Fell on Alabama,” “Desafinado,” “If,” “Autumn Leaves,” “Night and Day”) and splendid original tunes like this one. I love the way she alternates spitting short notes with drawled passages, growling effects and high soprano leaps. This is a vocalist of uncommon ability, and the band cooks with gas.

VICTOR WOOTEN/2 Timers
Writer: Victor L. Wooten; Producer: none listed; Publisher: VixLix/Bug, ASCAP; Heads Up (track) (www,victorwooten.com)
—This bass-playing virtuoso is nominated for two Grammy Awards as a member of The Flecktones. His current, almost entirely self composed Palmystery solo disc is a brain buzzing, sonically dazzling pastiche of shifting time signatures, burbling bass passages, evolving melodies and alternating emotional moods that completely captures your attention from this opening track onward. The various collaborators are a who’s-who of the Music City jazz scene. Heads Up International, the label of both this and the Take 6 CD, is a Cleveland, Ohio label that obviously has great taste.

WILLIE NELSON & WYNTON MARSALIS/Night Life
Writer: Nelson/Breeland/Buskirk; Producer: none listed; Publisher: Glad/Pappy Daily/Sony ATV Tree, BMI; Blue Note (track)
—Two Men with the Blues was recorded live at Lincoln Center last year. Wynton sings in spots as well as playing his distinctive trumpet. Willie is just Willie. I have always thought that his “Night Life” was essentially a jazz song, and now it is. I guess jazz agrees with The Red-Headed Stranger. His next project is with western swingers Asleep at the Wheel.