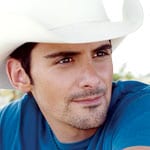 Reigning ACM and CMA Male Vocalist of the Year Brad Paisley today (1/26) revealed his 2009 touring plans. The outing, dubbed American Saturday Night, will run through 41 cities starting June 5 in Charlotte, NC. Special guests Dierks Bentley and Jimmy Wayne will join him for the tour that has cross-country dates scheduled through Oct. 17.

His current Paisley Party Tour has sold over 750,000 tickets for its 59 dates and continues through February. Paisley’s recent hit “Start A Band,” a duet with Keith Urban, was his record-setting ninth consecutive No. 1. He is also the cover feature on the March issue of Guitar Player magazine.