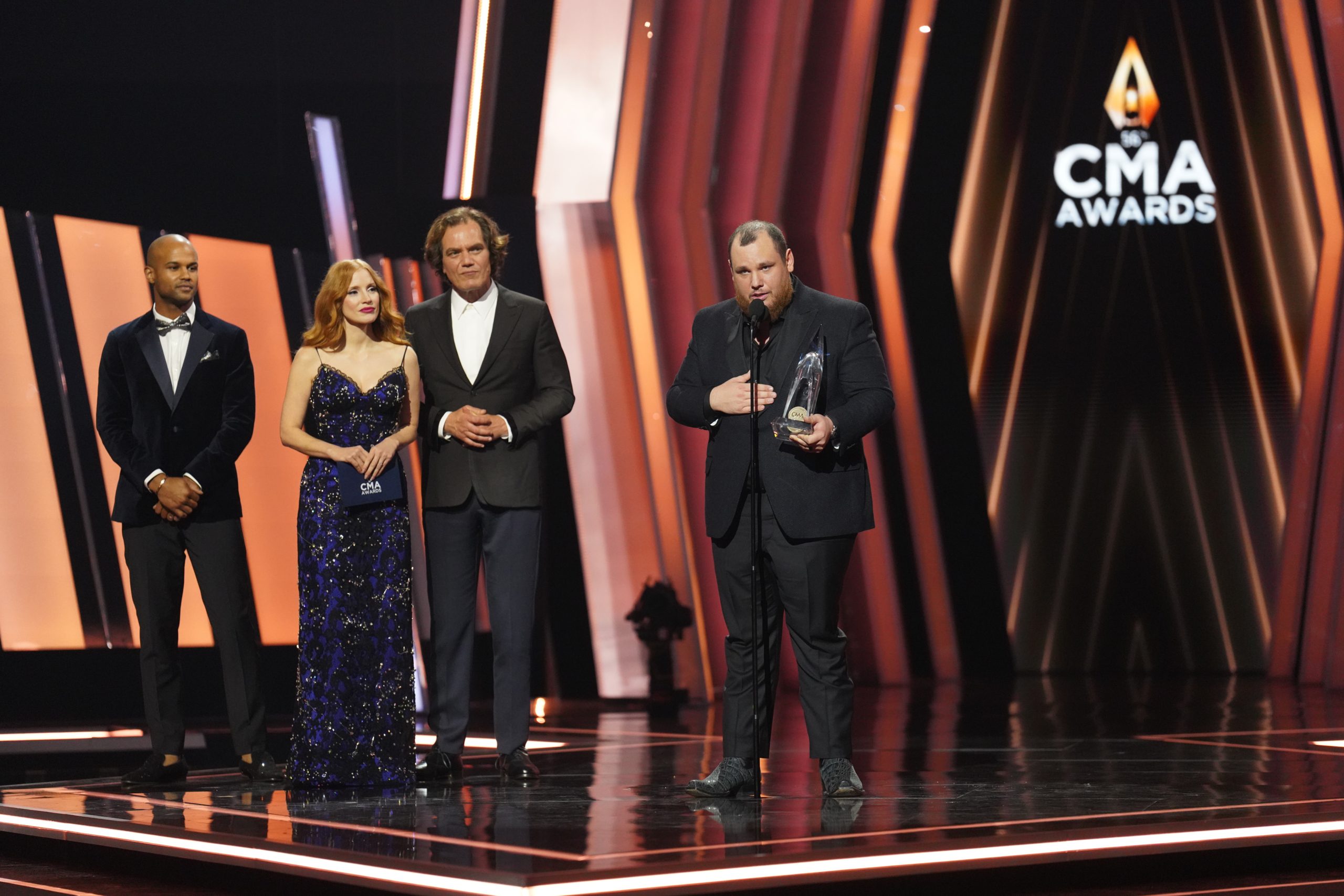 Luke Combs accepts the award for Entertainer of the Year at The 56th Annual CMA Awards. Photo: Courtesy of CMA

The music was as rich as the fellowship Wednesday night (Nov. 9) at the 56th annual CMA Awards. Live from Nashville’s Bridgestone Arena, the winners reflected the format embracing a cornucopia of sounds—plenty of which are pretty traditional country.

Luke Combs said it best when he closed the show with his second Entertainer of the Year trophy in hand. “Country’s sounding more country than it has in a long time tonight,” he said. And it had. 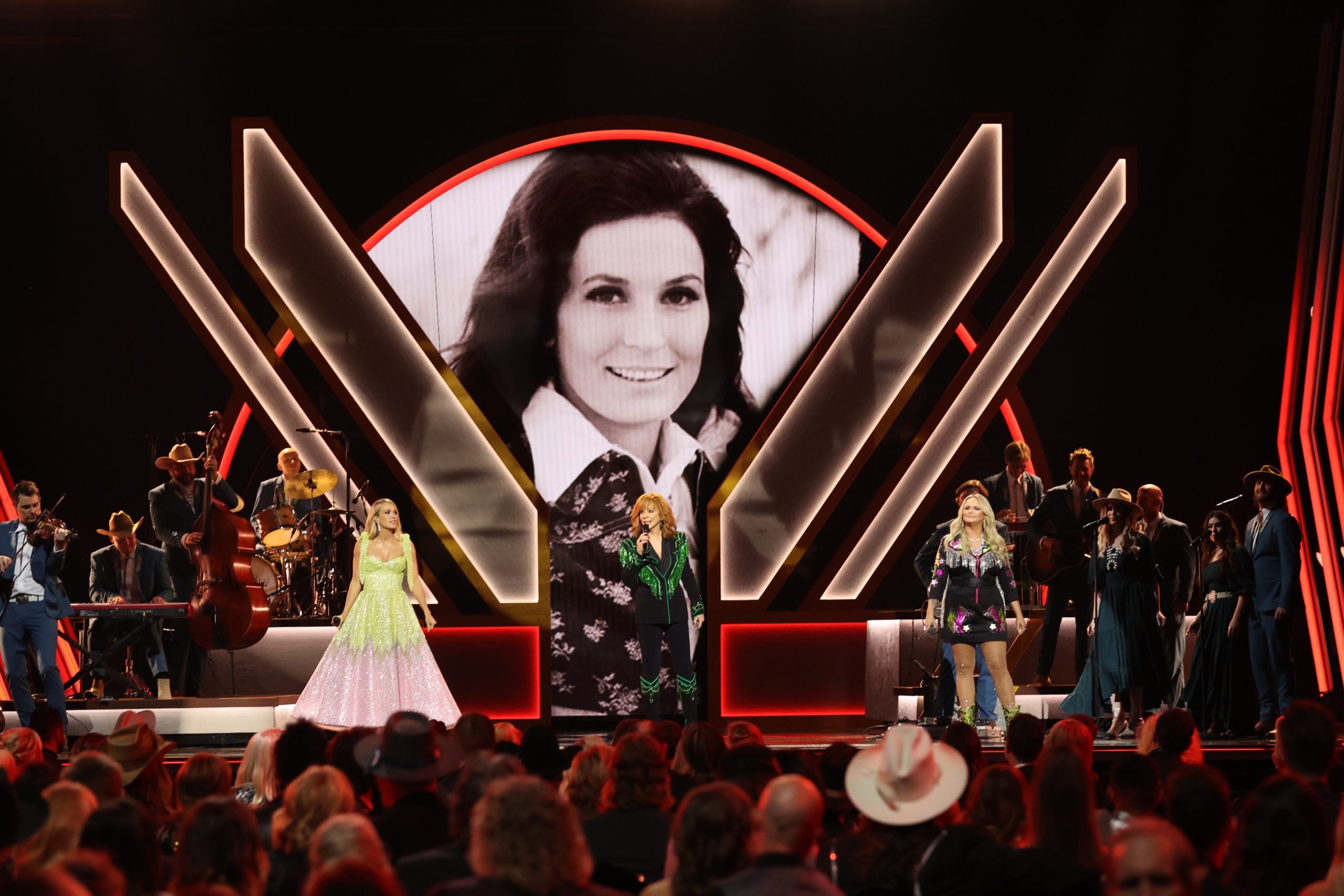 The telecast started with a vintage video of Loretta Lynn accepting her first-ever CMA Entertainer of the Year award. In the clip, the late legend said that while she was proud to be the first woman to ever win the title, she was sad that her husband Doo couldn’t be with her to celebrate. He was off hunting, she said with a grin.

Three iconic female country voices—Reba McEntire, Miranda Lambert and Carrie Underwood—began her tribute as soon as the show started. Underwood took on “You Ain’t Woman Enough,” Lambert followed with “Don’t Come Home A Drinkin’,” and McEntire sang “You’re Looking At Country.” Their voices joined together on Lynn’s “Coal Miner’s Daughter,” and the Country Music Hall of Famer’s family looked on with tears streaming down their faces. 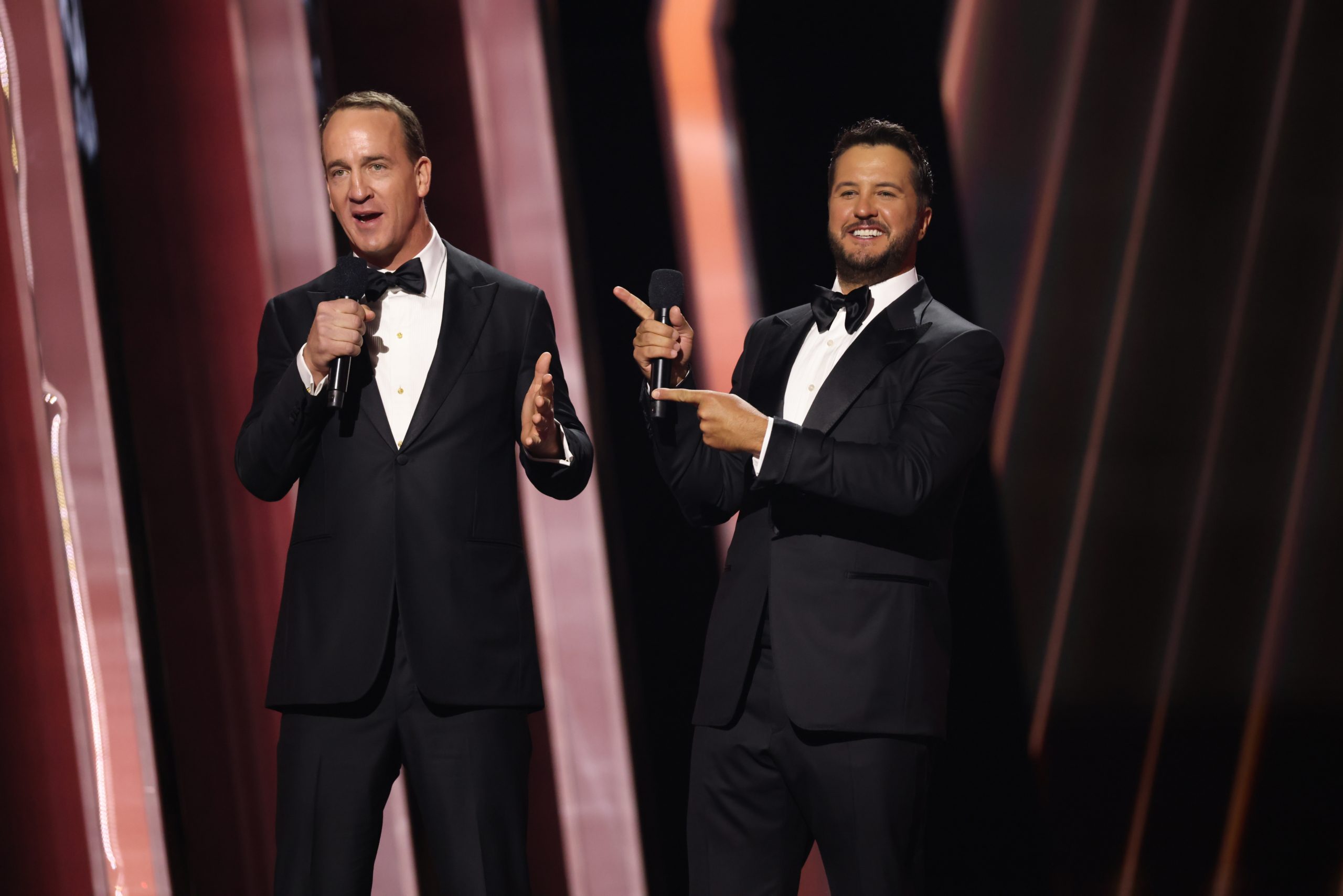 Later on in the show, Carly Pearce added her tribute to the late legend, singing her own tune “Dear Miss Loretta.” The performance was one of the night’s many highlights, with Pearce sounding like an Appalachian angel while bluegrass greats Ricky Skaggs and Sonya Isaacs backed her.

The show wasn’t all serious, though. Co-hosts Luke Bryan and NFL superstar Peyton Manning kept things light and silly when necessary. Manning, who is a big country music fan, equated the CMA Awards to the “Super Bowl of country music.”

Bryan quipped that he thought the Super Bowl was the CMA Awards for football. 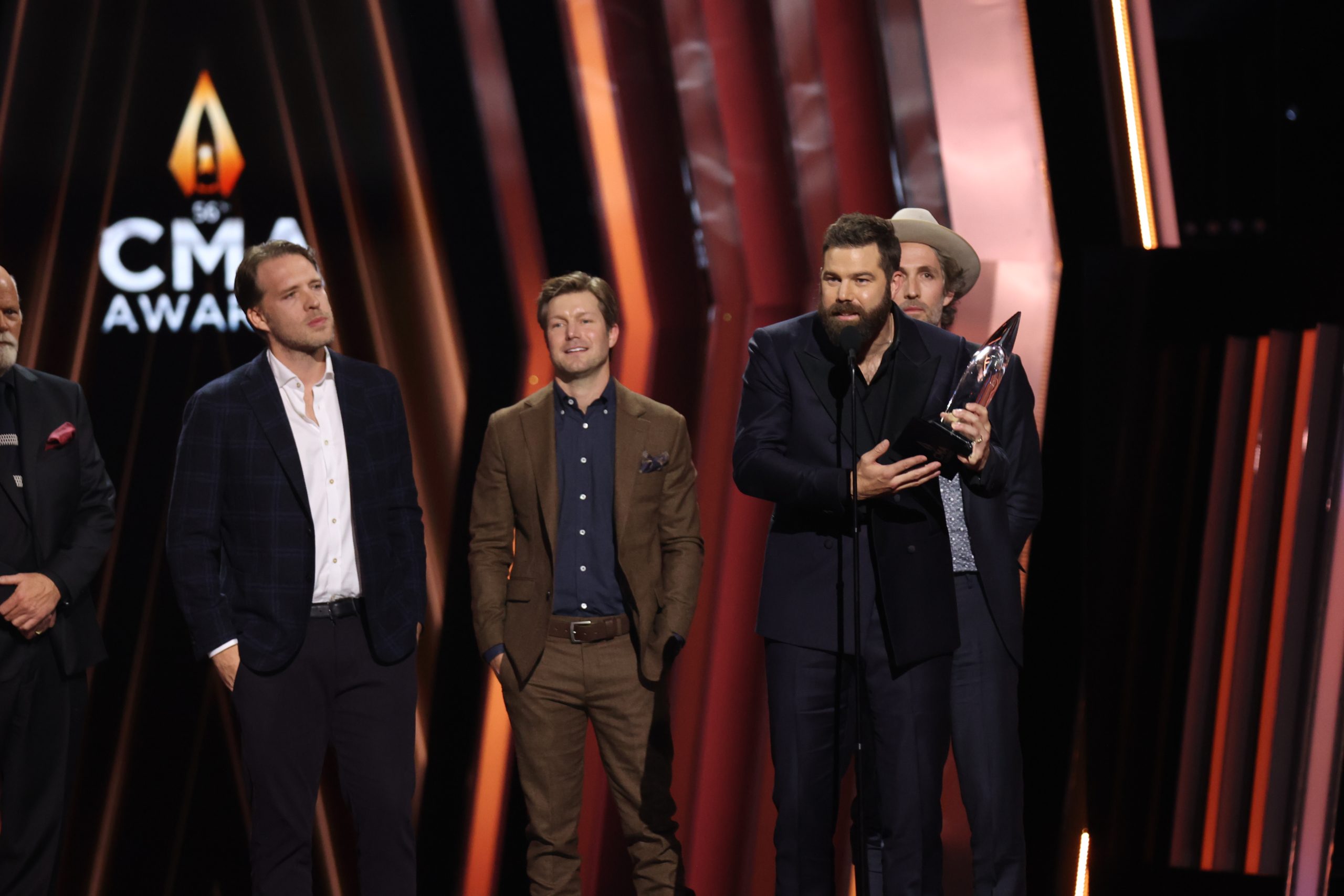 McEntire and boyfriend/Big Sky co-star Rex Linn presented the first award of the telecast to Jordan Davis for “Buy Dirt,” the CMA Song of the Year. The special song was written by two sets of brothers: Jordan and Jacob Davis and Matt and Josh Jenkins—who celebrated the same title at the NSAI Awards in September.

Davis was stunned when he stepped up to the mic to accept the trophy. He hassled his duet partner on the song, Luke Bryan, to join him. Bryan ran up to the stage, kissed Davis’ cheek, and left the young star to bask in his first CMA Award win.

“We wrote a song about faith and family. If that’s not country music, I don’t know what is,” Davis said. 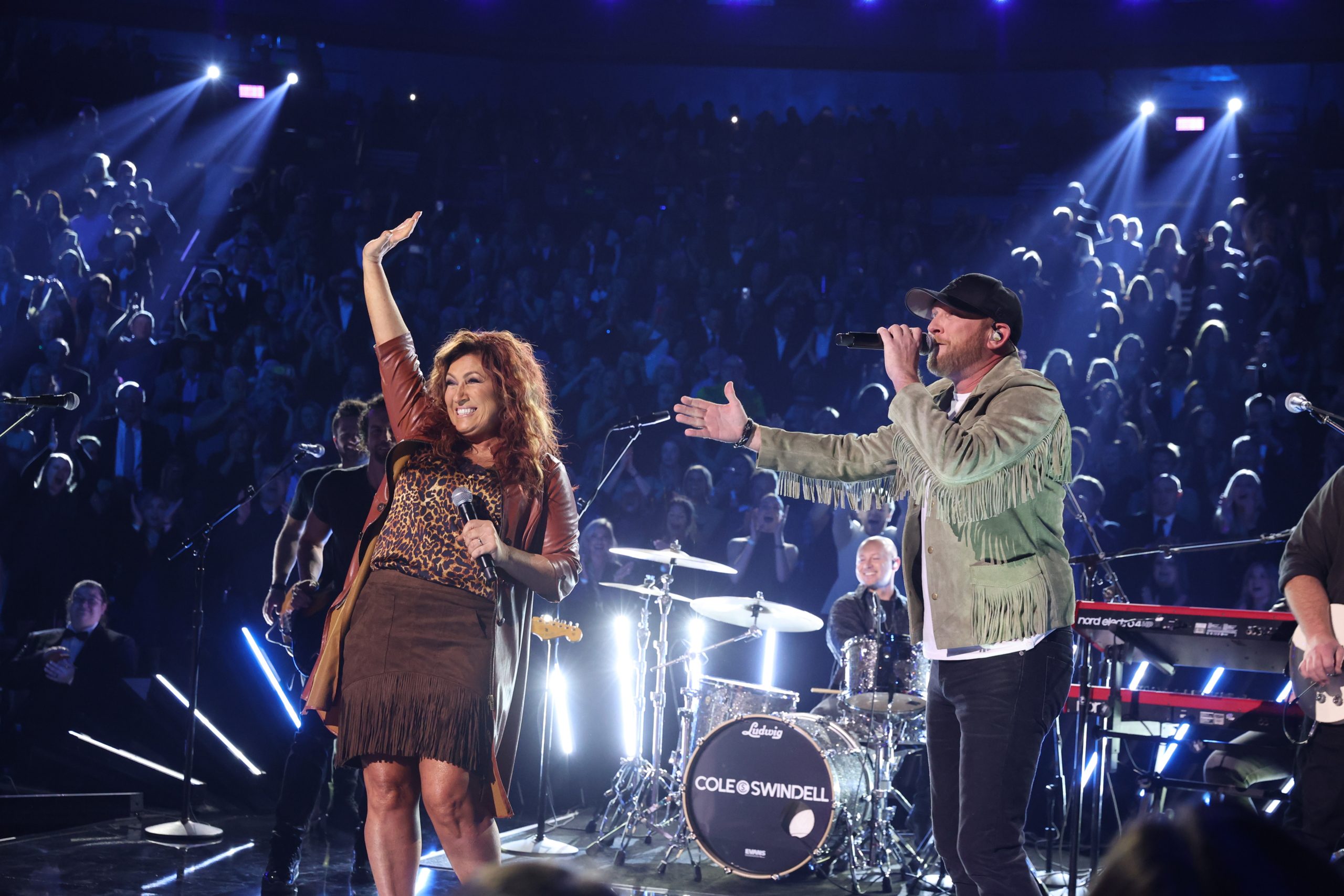 Cole Swindell and JoDee Messina perform a mashup of “She Had Me at Heads Carolina” and “Heads Carolina, Tails California.” Photo: Courtesy of CMA

A fun performance came with Cole Swindell‘s “She Had Me At Heads Carolina,” as Jo Dee Messina joined him on stage for a victorious finish. Another highlight was the Lindeville crew—including Ashley McBryde, John Osborne, Brandy Clark, Pillbox Patti and Caylee Hammack—sang a rousing version of “When Will I Be Loved” from McBryde’s illustrious concept album, Ashley McBryde Presents: Lindeville.

Another highlight was when hosts Bryan and Manning recognized the great Jeannie Seely for her recent accomplishment of being the most-performed artist on the Grand Ole Opry. 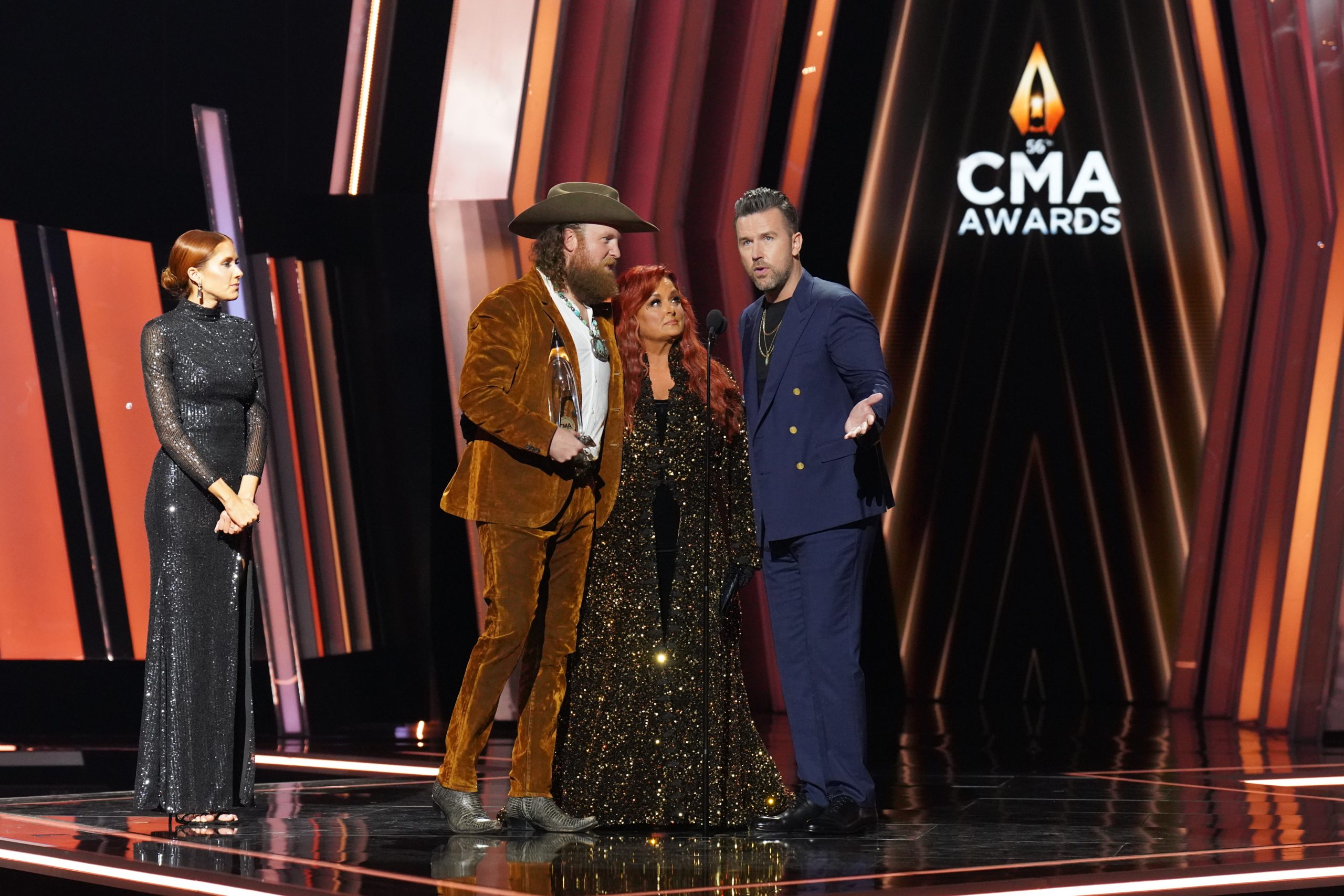 Brothers Osborne accepts the award for Vocal Duo of the Year. Photo: Courtesy of CMA

For the next award, Wynonna Judd was on hand to present Vocal Duo of the Year—an honor her and her late mother Naomi won seven times. The trophy went to Brothers Osborne for the sixth time. John Osborne let everyone know from the stage that he was going to be a first-time dad to twins with wife and fellow artist, Lucie Silvas.

“There’s nothing like being in a band,” Ramsey said. “I can’t imagine losing one of you guys.”

Zac Brown Band thrilled when they took the stage to perform their hyped-up “Out In The Middle.” The insanely gifted Marcus King joined them on guitar. 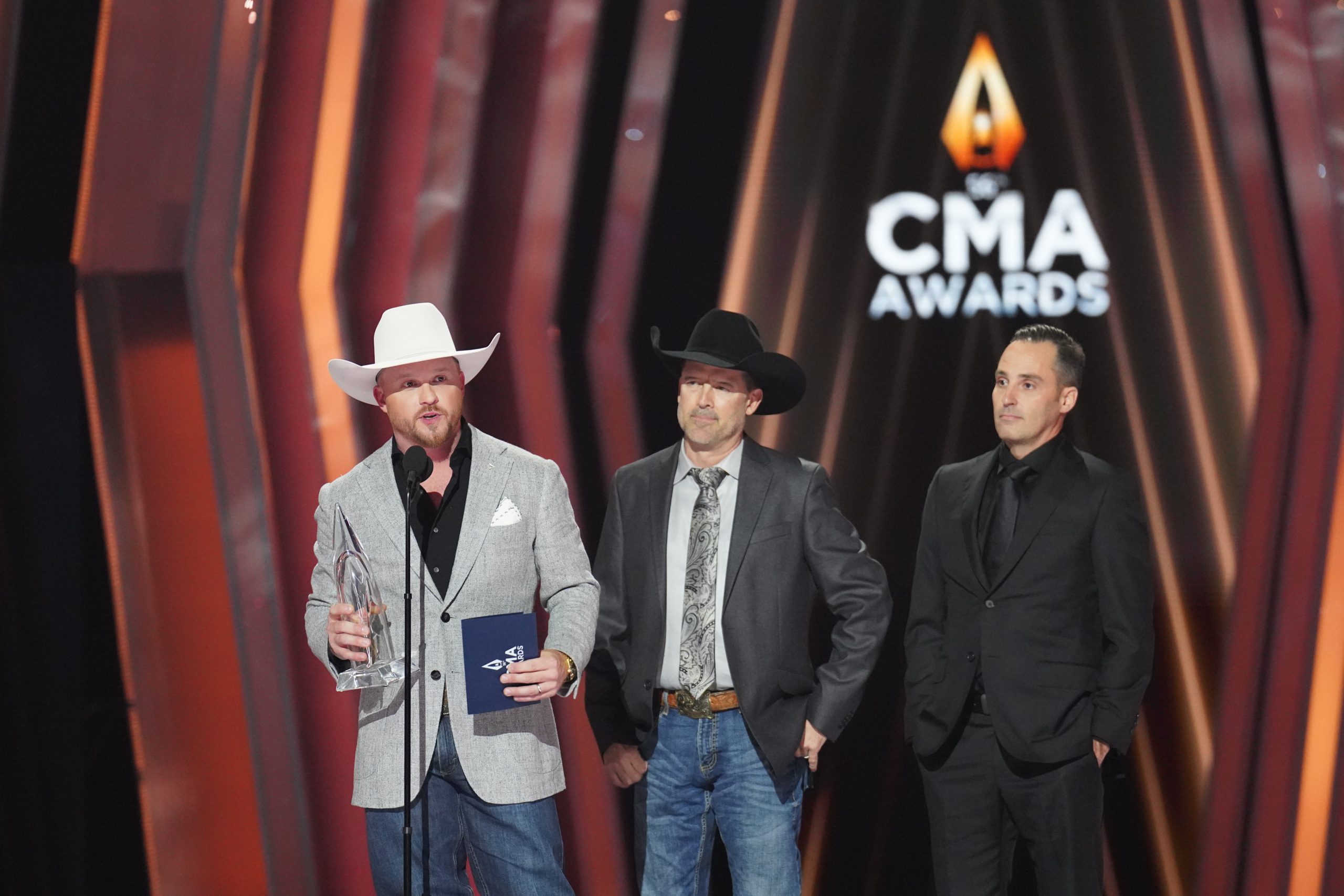 Cody Johnson, Jack Clarke, and Trent Willmon accept the award for Single of the Year. Photo: Courtesy of CMA

Single of the Year went to the very deserving Cody Johnson for “‘Til You Can’t,” in addition to producer Trent Wilmon and engineer Jack Clarke. Though Single of the Year does not go to the songwriters, Johnson made sure to recognize them right off the bat in his acceptance speech.

“Ben Stennis and Matt Rogers wrote, in my opinion, what is one of the greatest country music songs of all time. I was so blessed to have it in my hands,” Johnson said. “God bless country music!”

Thomas Rhett and Kate Perry performed next, singing “Where We Started.” Hardy and Lainey Wilson gave a dramatic performance of their duet “Wait In The Truck,” acting out a scene from the music video. Kelsea Ballerini enlisted friends Pearce and Kelly Clarkson for her “You’re Drunk, Go Home.”

Yellowstone actor Cole Hauser presented Luke Combs with his first trophy of the night, Album of the Year, for Growin’ Up. Lady A presented New Artist of the Year to Lainey Wilson, which marked her first CMA Award win. 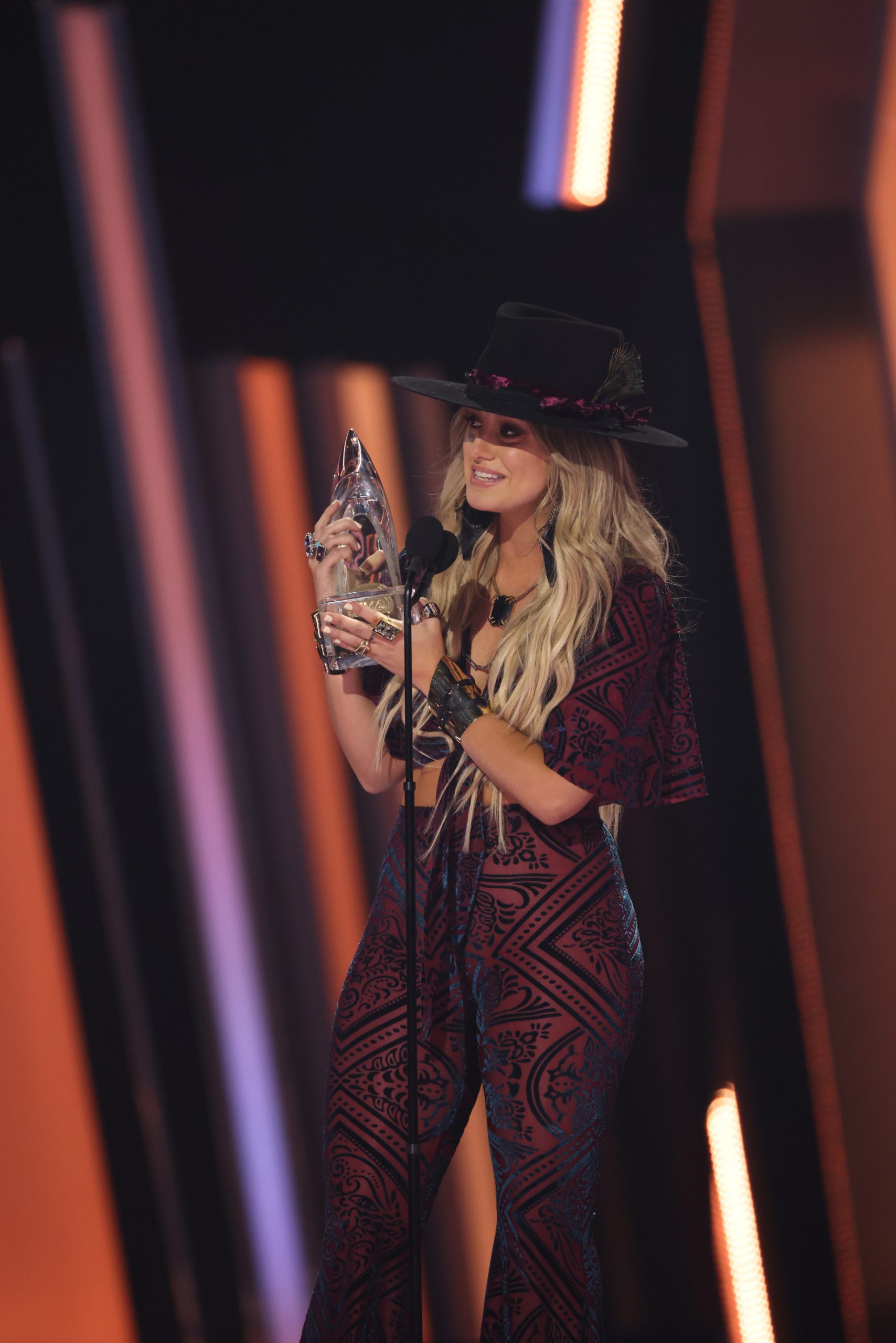 Lainey Wilson accepts the award for Female Vocalist of the Year. Photo: Courtesy of CMA

An emotional Wilson knew just what to say and who to thank, giving a long list of her stellar team. “This is for that 9-year-old little girl who wrote her first song, who knew in her heart this is what she was supposed to do. This is for those 11 years that I’ve been here in Nashville and not taken no for an answer,” Wilson said before closing with, “We’re just gettin’ started, let’s go!”

She wasn’t wrong. A bit later in the show Wilson was called back up to accept Female Vocalist of the Year, joining the ranks of Underwood and Alison Krauss as the only other artist to win both Female Vocalist and New Artist in a single year. 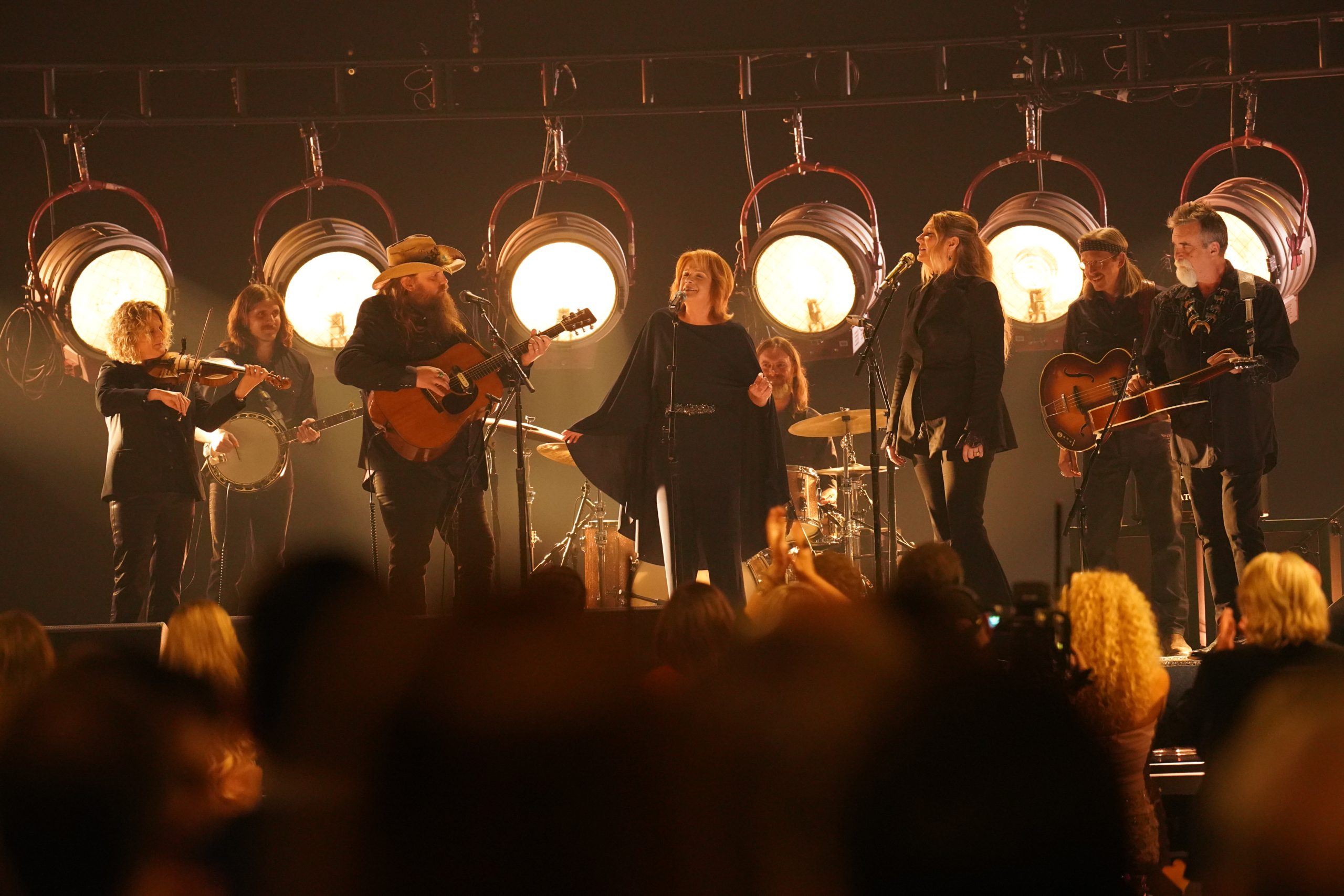 Loveless sounded so fantastic that Stapleton seemed to be holding back, just taking in her vocal ability. The hair-raising performance was six minutes of pure country bliss.

Other great collaboration moments came with The War & Treaty‘s performance of the Rolling Stones hit “It’s Only Rock and Roll (But I Like It)” with Brothers Osborne; as well as Elle King and The Black Keys‘ tribute to the late Jerry Lee Lewis.

Before the last award of the night, the great Alan Jackson was honored with the 2022 CMA Willie Nelson Lifetime Achievement Award. Underwood, Wilson, Dierks Bentley, and Jon Pardi paid tribute to the Hall of Famer with snippets of “Remember When,” “Chattahoochee,” “Drive (For Daddy Gene),” and “Chasin’ That Neon Rainbow.” 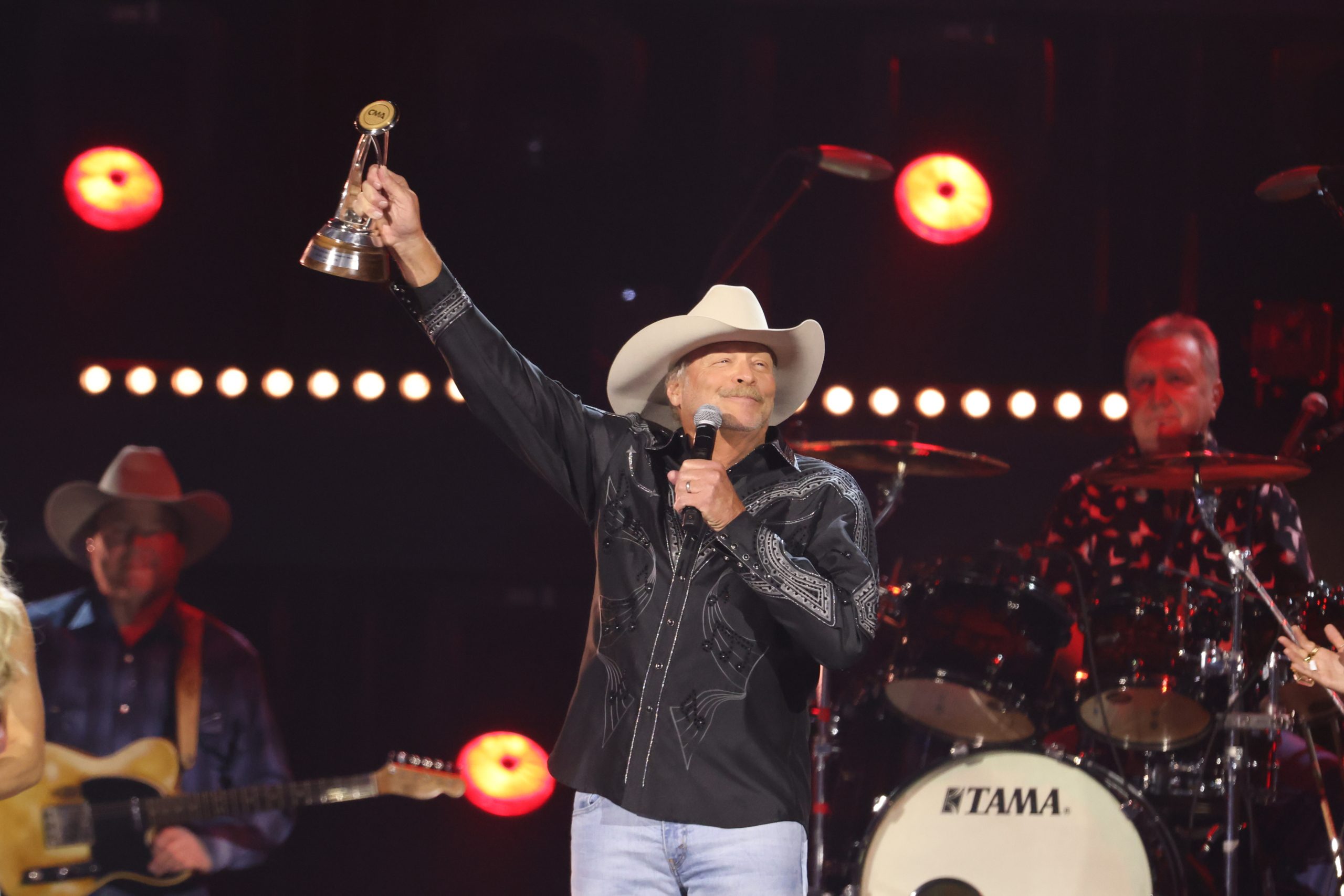 Jackson performed his 1991 hit “Don’t Rock the Jukebox” before accepting his award.

“Country music’s been real good to me. I fell in love with it when I was a young man,” Jackson said. “I’ve been such a fan of this music and I just wanted to come to Nashville to play the music I loved.

“I’m still living that honky tonk dream,” he said in closing, raising his trophy to the sky.

When it came time to award the night’s highest honor, Entertainer of the Year, it went to Luke Combs for the second consecutive year.