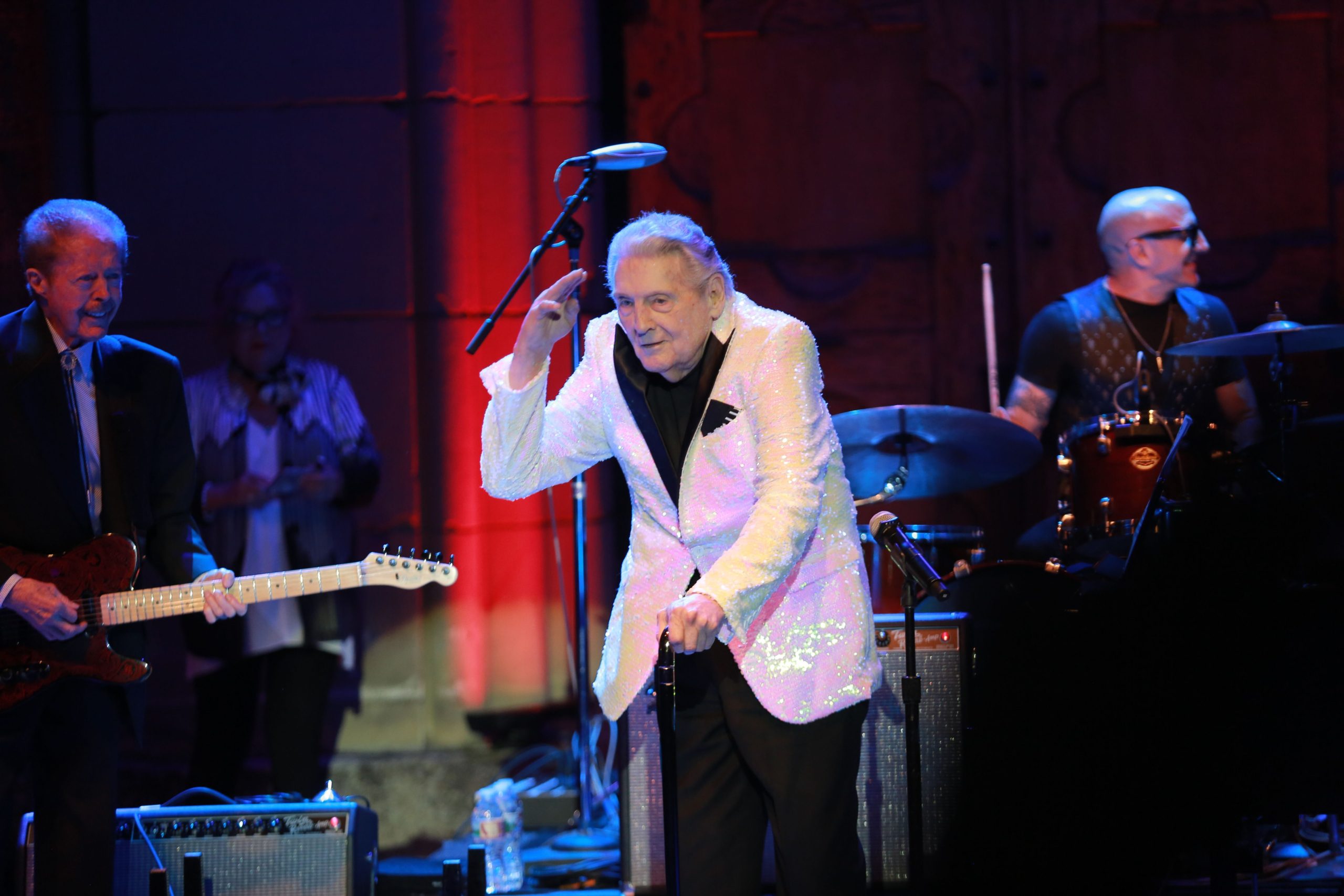 The Rock ‘n’ Roll Hall of Fame member was renowned for his flamboyant showmanship in whatever musical genre he performed. His controversial lifestyle, outrageous antics, livewire energy and unfiltered language made him one of the most colorful characters in the annals of popular music.

Jerry Lee Lewis’s frenetic “Great Balls of Fire” and “Whole Lotta Shakin’ Going On” established him as one of rock’s founding figures in the 1950s. After a fall from grace, he reestablished himself with a stunning barrage of hits in 1968-82 as a country-music master.

Born in Ferriday, Louisiana, Lewis was part of a clan of musical personalities that included his cousins, evangelist Jimmy Swaggart and “Urban Cowboy” country star Mickey Gilley. After being expelled from Bible college, Lewis began his climb to stardom when he auditioned at Sun Records in Memphis for producer Jack Clement (1931-2013). Clement played his tapes for label owner Sam Phillips (1923-2003).

Phillips issued Lewis’s debut single in 1956. It was an intense remake of the Ray Price classic “Crazy Arms,” characterized by the singer’s characteristic florid piano glissandi. It became a modest regional Southern hit.

The following year, Lewis achieved an international smash sensation with the fiery “Whole Lotta Shakin’ Going On.” He followed it with “Great Balls of Fire,” which also hit No. 1 on every chart in sight. A remake of the Hank Williams standard “You Win Again” gave him another country hit as 1958 dawned.

Then “Breathless” became his third simultaneous hit on both pop and country charts. “High School Confidential” was the title tune from a teen movie in which he appeared in 1958. He also appeared in the 1957 feature film Jamboree. 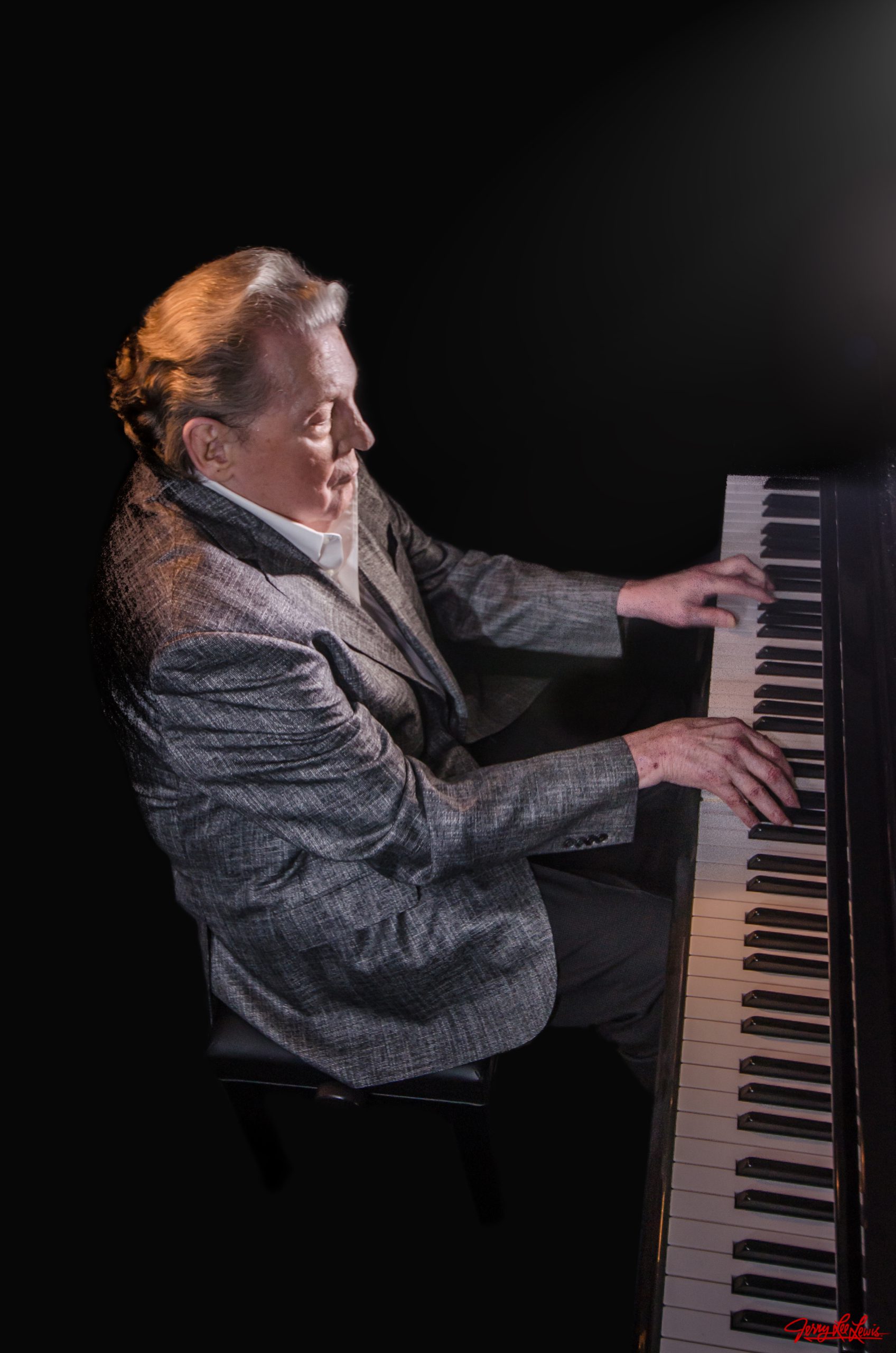 During this era, he became famous for his wild, dynamic stage style. Lewis kicked over piano benches, played standing up, raked his hands over his keyboards for dramatic effect, pounded them with his heels and attacked them relentlessly. He even demolished pianos, shoving one off stage and lighting another on fire.

He was 22 when he married his third wife, his 13-year-old cousin Myra Gale Brown, in 1958. When they appeared together during a tour of Great Britain, a scandal erupted. His pop-music career was devastated as U.S. radio stations blacklisted his discs.

During the early 1960s, Lewis issued everything from the Ray Charles classic “What’d I Say” to the Hank Williams chestnut “You Win Again.” Nothing he tried brought him back to prominence.

He signed with the Nashville division of Mercury/Smash in 1963, yet initially continued to record rock songs. In 1968, he soared into the country top 10 with a masterful performance of the honky-tonk ballad “Another Place, Another Time.” This launched a totally new era of his career.

At the time, he was performing the role of Iago in the Los Angeles musical stage production Catch My Soul, which was based on Shakespeare’s Othello. Lewis returned to Nashville to capitalize on his new success by recording with producer Jerry Kennedy.

Jerry Lee Lewis solidified his country stardom with the hit 1968 singles “What’s Made Milwaukee Famous (Has Made a Loser Out of Me),” “She Still Comes Around (To Love What’s Left of Me)” and the No. 1 country success “To Make Love Sweeter For You.” He teamed up with sister Linda Gail Lewis for 1969’s hit duet “Don’t Let Me Cross Over.”

He continued his country hit streak with 1969’s “One Has My Name,” “Invitation to Your Party,” “She Even Woke Me Up to Say Goodbye” and “One Minute Past Eternity.”

“Chantilly Lace” became his biggest country hit of all. It was also nominated for a country Grammy Award.

Ironically, that song referenced his rock ‘n’ roll past. So did such early 1970s recordings as “Lonely Weekends,” “Drinkin’ Wine Spo-Dee O’Dee,” “Boogie Woogie Country Man” and “I’m Left, You’re Right, She’s Gone.” But his biggest country hits continued to be emotional ballads such as “Sometimes a Memory Ain’t Enough” (1973) and “He Can’t Fill My Shoes” (1974).

He divorced Myra in 1970 and married his fourth wife the following year. They were in the midst of divorce proceedings when she died in a swimming-pool drowning in 1982.

As the 1970s wore on, his country hits continued, although more sporadically. Jerry Lee Lewis returned to the country top-10 in 1976 with “Let’s Put It Back Together Again.” His memorable 1977 hit “Middle Age Crazy” inspired a Hollywood film starring Bruce Dern and Ann-Margret. Lewis next scored back-to-back top-10 hits with 1978’s “Come On In” and “I’ll Find It Where I Can.”

His behavior, always erratic, became even more so in 1975-79. He had numerous arrests—for disorderly conduct, drunk driving, assault, possession of pills and shooting his bass player in the chest. In 1976, he was carrying a gun when he crashed his Lincoln into the gates of Graceland in Memphis and demanded to see Elvis. In 1979, the I.R.S. seized his property because of his unpaid taxes.

He signed with Elektra Records and debuted on the label with the two-sided hit “Rockin’ My Life Away”/”I Wish I Was 18 Again” in 1979. “When Two Worlds Collide” and “Over the Rainbow” both became Elektra country hits in 1980.

In 1981, his ulcerated stomach ruptured, and he lay close to death for weeks. When he finally emerged from the ordeal, he was addicted to painkillers. During that same year, “Thirty Nine and Holding” became his final top-10 country hit.

The first books about him were published in 1981—Robert Palmer’s Jerry Lee Lewis Rocks! and Robert Cain’s Whole Lotta Shakin’ Goin’ On. In 1982 came Hellfire, by Nick Tosches and Great Balls of Fire by Myra Lewis and Murray Silver.

Lewis recorded for MCA Records in Nashville in 1982-83. But no significant hits ensued.

The star’s fifth marriage lasted only 77 days in 1983 before that wife died, probably of a drug overdose. Some journalists suggested that his longtime moniker “The Killer” was more than a nickname.

He wed his sixth wife in 1984. Lewis suffered a second ulcerated stomach perforation in 1985, but rose from his near-deathbed to be inducted into the Rock N Roll Hall of Fame in Manhattan in early 1986. Hank Williams Jr. did his induction honors.

This was the first rock-hall induction, and Jerry Lee Lewis and Chuck Berry dominated its all-star finale. Among the other performers honored that evening were Fats Domino, Ray Charles, The Everly Brothers and James Brown. Also inducted were the absent Little Richard and the late Elvis Presley, Sam Cooke, Buddy Holly, Robert Johnson and Jimmie Rodgers.

Later that same year, he recorded Class of ’55 with Johnny Cash, Carl Perkins and Roy Orbison. Its interview disc won a Grammy.

In 1989, Jerry Lee Lewis cooperated on a film biography of his life, Great Balls of Fire. Starring Dennis Quaid as Jerry Lee and based on Myra’s book, it was not well received. Lewis did, however, receive his star in the Hollywood Walk of Fame in 1989.

The second wave of Jerry Lee Lewis books arrived in the 1990s. These included 1991’s Rockin’ My Life Away by Jimmy Guterman and 1998’s The Devil, Me and Jerry Lee by sister Linda Gail Lewis.

Although no longer making the popularity charts, Jerry Lee Lewis remained an in-demand concert draw, particularly in Europe and the British Isles. As a new century dawned, he kicked his addictions to pills and alcohol. He went through withdrawals, unaided, at his home in Nesbit, Mississippi. He said he did it through prayer.

Although now clean and sober, he began to succumb to the ravages of old age. He suffered from crippling arthritis, repeated bouts of pneumonia and attacks of shingles, as well as his nagging stomach ailments. Against all odds, he persevered.

In 2005, he was given a Grammy Lifetime Achievement Award. Three years later, he appeared on the 50th-anniversary Grammy Awards telecast.

He followed it with 2010’s Mean Old Man, another all-star collection. That same year, Lewis was memorably portrayed in the Broadway musical The Million Dollar Quartet, which continues to tour today.

Jerry Lee Lewis returned to Nashville in 2011 to record a live album at Jack White’s Third Man Records. A year later, he married his longtime caregiver, Judith Ann Coghlan. He fractured his leg on his wedding day.

After recovering, in 2013 he opened Jerry Lee Lewis’ Café & Honky Tonk on historic Beale Street in Memphis. Next, he cooperated with author Rick Bragg on the definitive 2014 biography, Jerry Lee Lewis: His Own Story. It was accompanied by another new album, Rock & Roll Time.

In late 2014, he kicked off “Jerry Lee’s 80th Birthday Tour,” which spanned the U.S. and continued in Europe the following year. He drew four encores when he played The Ryman Auditorium in 2014. And he continued to entertain concert offers into early 2016.

He was inducted into the Country Music Hall of Fame in 2022, though he was not well enough to attend the ceremony.

In lieu of flowers, the Lewis family requests donations be made in Jerry Lee Lewis’ honor to the Arthritis Foundation or MusiCares.

A memorial service for Lewis will be held this weekend in Hernando, Mississippi and his birthplace, Ferriday, Louisiana. Click here for more details.