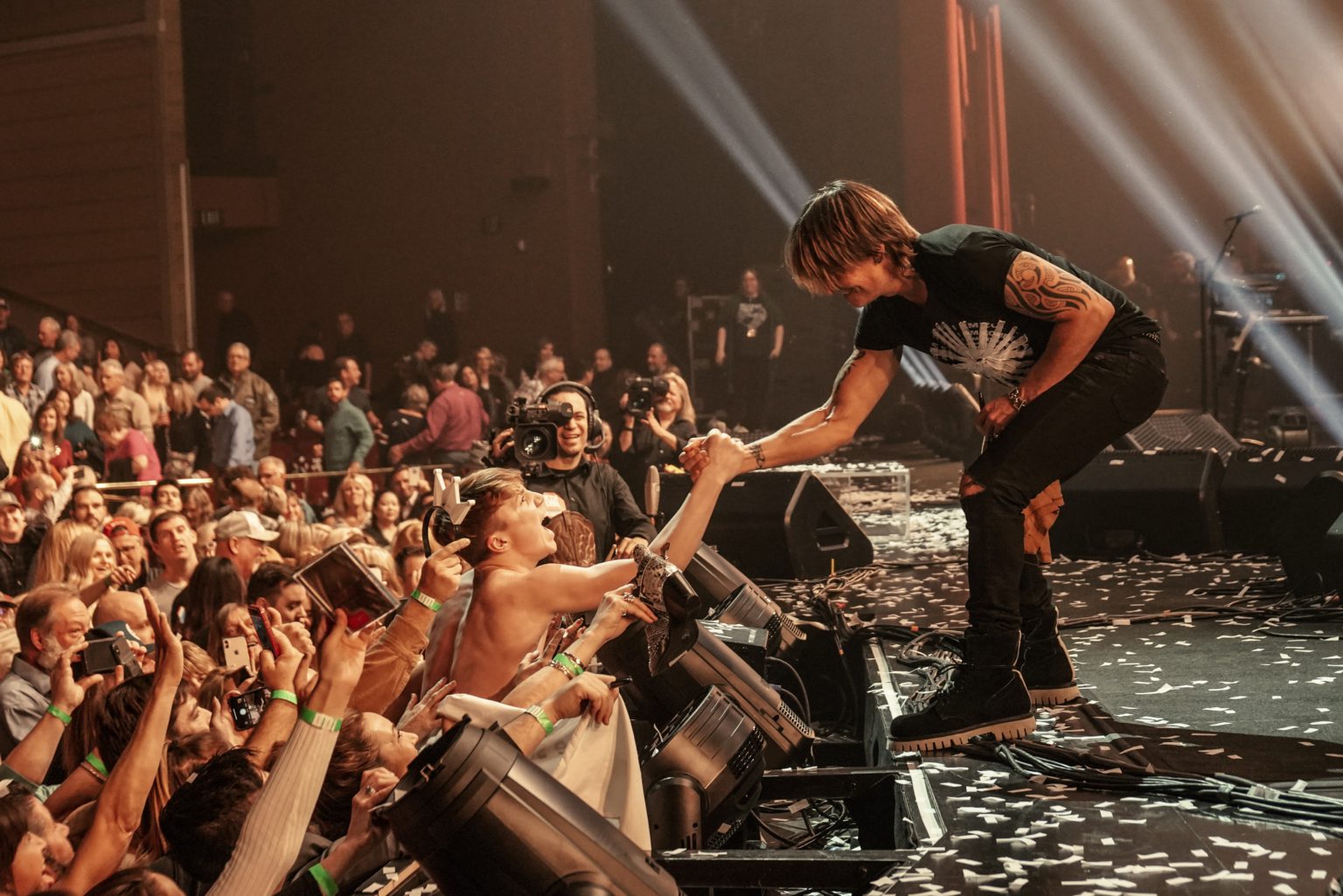 The two and a half hour show is filled with hits, with Urban energetically busting out many of his 24 No. 1 hits night after night. After playing a few dates in the U.K., the tour launched in Tampa, Florida and has included dates across the United States and Canada. Grammy-nominated singer-songwriter Ingrid Andress has served as support throughout the “The Speed Of Now World Tour.”

Despite nearly four years off the road, Urban says that the energy of the crowd hasn’t changed.

“I’ve always tried to create an experience that results in a certain reaction from the audience and a certain engagement from them,” Urban tells MusicRow. “That hasn’t changed for me. And the audience is as passionate, involved and engaged as ever.”

Though “The Speed Of Now World Tour” is another great success for Urban, it didn’t come without challenges.

“The number one challenge was keeping the show on the road, which has eased a lot recently, but is still a reality,” he says. “We definitely got pummeled with various crew members being knocked out during rehearsals for the tour, which has never happened to me before. It made for an interesting start to the tour where we were building a lot of things as we went.”

Another big challenge Urban had to face was the loss of his beloved tour production manager, Randy “Baja” Fletcher. The touring veteran died on Aug. 27, 2021 following a tragic fall at a show site.

Though Fletcher was a vital and missed part of Urban’s crew, he says that his legacy lives on at his shows.

“I’m not trying to fill his shoes,” he says. “One of the beautiful blessings that happened is his daughter, Natalie, is now on our crew, so there is a piece of Baja there every day in Natalie.

“Baja was such an optimistic person. He brought such an optimism everywhere. We were in Alabama the other day and it was pouring rain. His daughter walked by me and said, ‘Daddy used to say that some people feel the rain and some people just get wet,'” Urban shares with a laugh. “He’s alive and well on our crew.”

Despite the challenges Urban and his crew have faced, the show must go on. He says that while the fan engagement has remained as passionate as ever, he is noticing some new faces out on the road.

“The thing that’s caught me most by surprise is how many new people are at our concert. I’ve actually started asking by show of hands who has never seen us before. About a third of their hands go up sometimes. It’s unbelievable,” he says. “We will play older songs and a lot of those people don’t know those songs—but they know all the ones from the last few years. That’s not a change that I expected, but certainly welcomed.”

When asked about his favorite moments of the show, the two-time CMA Entertainer of the Year says he can’t pick.

“The whole thing!” he says with a laugh. “I build a show that I want to play first and foremost—that I’m excited to play. If I’m really passionate and having the time of my life, it’s most likely going to feed out into the audience as well.

“There’s so many great moments. We come out opening with ‘Tumbleweed,’ which is off the new album. It’s such a dynamic way to open a show. Every singalong moment, which seems to be almost all the songs, is great. The audience is so diverse that it seems no matter what we play, there’s someone somewhere that knows every word.”

“There’s a guy in town named Joe Fisher, who has been a friend of mine for a long time. He heard the song and sent it to me. It was love at first listen. It just connected with me lyrically, melodically, thematically… Everything about the song I just loved,” Urban says.

“We started playing it before we released it. The funniest thing about that song is the very first night we did it, which was opening night of the tour in Tampa, by the second chorus, I was watching people try to sing along with it. I’ve never seen that before—people trying to sing along with a song they’ve never heard. Surely that’s a good sign.”

In July Urban announced that new label-mate Tyler Hubbard would be joining him and Andress in the fall, starting in Mountain View, California on Sept. 3.

“We had written ‘Dancin’ In The Country,’ and I’d never really gotten to spend that much time with Tyler. I just loved his vibe and energy, and I knew that he was embarking on his solo career. I said to him, ‘Would you have any interest wanting to come out with us in the fall? [With Ingrid], the three of us could do something really special.'”

Urban and Andress will play a few more shows before Hubbard joins them on Sept. 3. “The Speed Of Now World Tour” will hit Nashville’s Bridgestone Arena on Oct. 7. Tickets for select dates are available now.