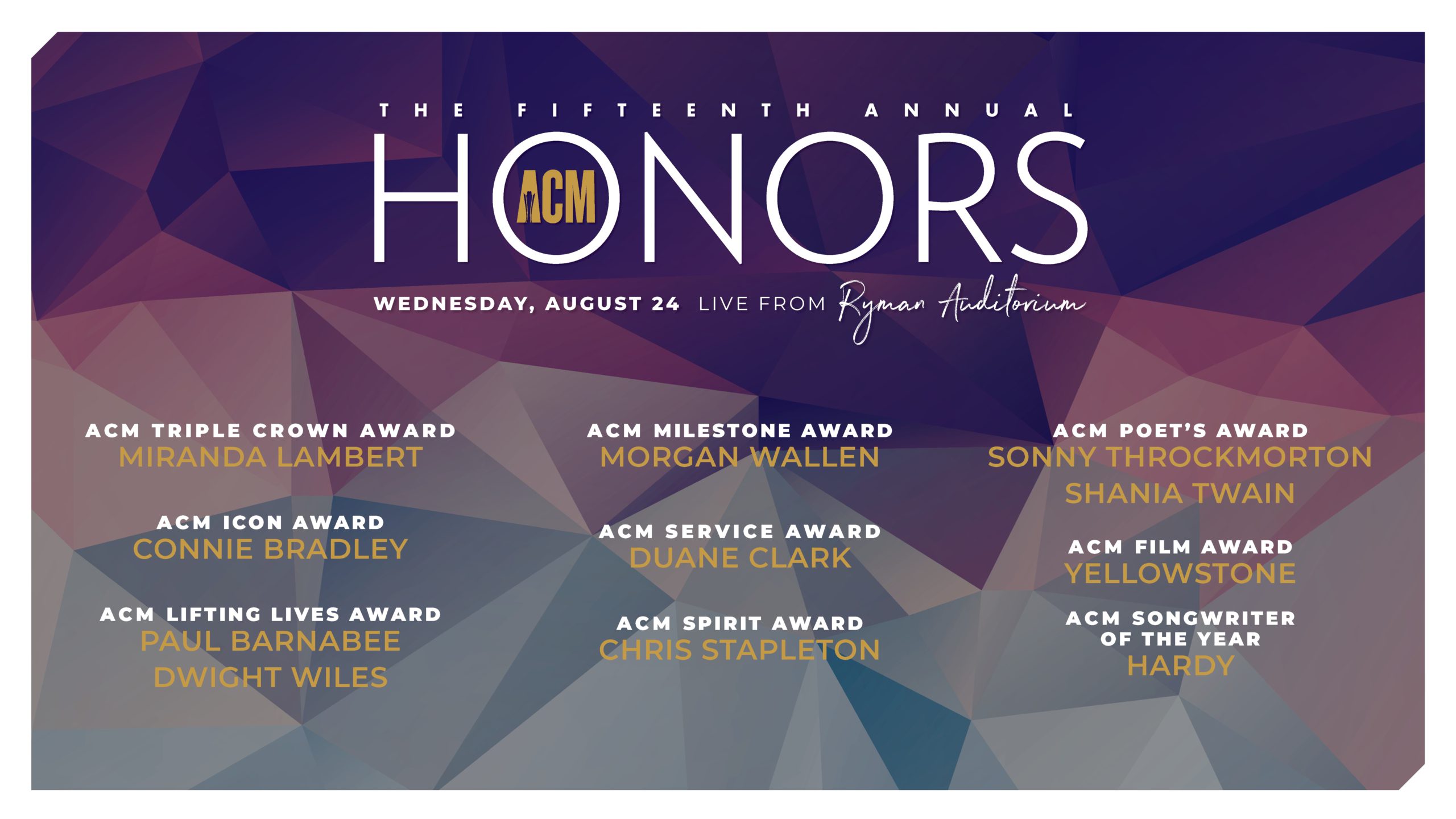 “ACM Honors is truly a special and unique night as the entire country music community comes together to celebrate the achievements of artists, musicians, and industry executives that have made a positive impact on the industry during the prior year or over their careers,” notes Academy of Country Music CEO Damon Whiteside. “Being the 15th anniversary of this event also makes it a night to remember some of the Academy’s pioneers who originally inspired these honors.”

Previously announced Songwriter of the Year winner Hardy, as well as the Studio Recording Award and Industry Award winners, will be feted at ACM Honors. Performers, host, and ticket on-sale information will be announced in the coming weeks.

Lambert continues to reign as the most decorated artist in the history of the ACM, most recently earning her second ACM Video of the Year award and her first ACM Entertainer of the Year title at the 57th ACM Awards, bringing her career total to 37 ACM awards. Additional highlights include a record-setting nine consecutive ACM Female Artist of the Year awards, ACM Song of the Decade for “The House That Built Me,” 10 ACM Song and ACM Single of the Year awards (as either an artist or an artist and songwriter), the ACM Milestone Award, and the first-ever ACM Spirit Award.

ACM Icon Award – Connie Bradley has been chosen to posthumously receive the ACM Icon Award, honoring the contributions of Cliffie Stone, who was known for his producing work along with his country music career. This award is presented to a country music artist, duo/group or industry leader who has advanced the popularity of the genre through their contributions in multiple facets of the industry, such as songwriting, recording, production, touring, film, television, literary works, philanthropic contributions, and other goodwill efforts.

ACM Lifting Lives Award – Paul Barnabee and Dwight Wiles have each been chosen to receive the Lifting Lives Award, honoring the contributions of Gary Haber, known as a business manager and past president of ACM Lifting Lives. This award is presented to a country music artist, duo/group, or industry professional who is devoted to improving lives through the power of music, has a generosity of spirit, and is committed to serving others. It is voted on by the ACM Lifting Lives Board of Directors.

Barnabee has been an avid supporter of ACM Lifting Lives throughout his career. Having served two consecutive years as the Chair of the ACM Lifting Lives Board of Directors, his passion and investment played an instrumental role in jumpstarting the ACM Lifting Lives COVID-19 Response Fund in 2020. A senior staffer tapped to lead Flood, Bumstead, McCready & McCarthy, Inc.’s (FBMM) Los Angeles office, Barnabee has 30 years of diverse industry experience in many divisions including Polygram Records, Sony Music, and FBMM. He also served as Chairman of the board for the ACM (2015-2016) and was a member of the board for the Make-A-Wish Foundation of Middle Tennessee for five years.

With over a decade of service to ACM Lifting Lives, Wiles’ tenure on the organization’s Board dates back to before its 2008 rebranding, when it was still named the ACM Charitable Foundation. During this time, Wiles played an integral role in shaping the organization’s charitable efforts, building many of the core tenets of ACM Lifting Lives that remain today, including Party for a Cause, the Grant Cycle, and Music Camp. Having served the longest tenure as Treasurer on the Board of Directors, Wiles’ financial leadership enabled ACM Lifting Lives to give generously to the country music community throughout the years. As a Certified Public Accountant who helped build business management firm Wiles + Taylor & Co., his experience in the music industry spans three decades, encompassing personal management for several artist clients, business management, and financial consulting. Wiles is a former board member of Nashville’s WPLN and Leadership Music, and a current member of ACM, CMA, NARAS, TSCPA and AICPA. He is also co-owner of Do Write Music.

ACM Milestone Award – Morgan Wallen has been chosen as the recipient of the ACM Milestone Award, honoring the contributions of Gene Weed, who directed and produced the ACM Awards for more than 30 years. This award is presented to a country music artist, duo/group or industry leader for a specific, unprecedented or outstanding achievement in the field of country music during the preceding calendar year.

Wallen’s critically-acclaimed Dangerous: The Double Album launched the singer’s career to new heights in 2021. Landing at No. 1 on the Billboard 200 chart for 10 weeks following its release, the project remains at the top of the charts, recognized as the country album with the most weeks (60) in the top 10 on the Billboard 200 all-genre chart, and the most weeks (59) at No. 1 on the Top Country Albums chart, to date. It also won ACM Album of the Year at the 57th ACM Awards in March 2022. With more than 4.1 million units sold, the singer’s rapid rise and unparalleled success earned him Country Male Artist of the Year at the 2022 Billboard Music Awards. Wallen’s 55-show “The Dangerous Tour” has netted over 800,000 tickets sold in 2022 so far, with $3 from every ticket benefiting his More Than My Hometown Foundation. His first solo release of 2022, “Don’t Think Jesus,” earned a Top 10 Billboard Hot 100 debut and landed atop Billboard Hot Country Songs chart, making Wallen the first artist to score three No. 1 debuts on the chart since its inception.

An award-winning business manager and trusted adviser, Clark has been a co-owner of FBMM for over a decade. As President and Chief Operations Officer at FBMM, he has provided counseling and strategic support to his roster of clients, ensuring their financial management and security for years to come. His long history of dedicated service to the industry is evident through his 13-year tenure on the ACM Board of Directors, beginning in 2009. From 2011-2016, Clark served as Treasurer of the Academy’s Board, playing an instrumental role in making the record-setting 50th ACM Awards show at AT&T Stadium in Dallas a monumental success. Clark served as Chairman of the organization from 2018-2019 and continues to support the Academy as Treasurer of the ACM Lifting Lives Board of Directors. He also acts as a financial advisor to Country Radio Broadcasters, is a member of the Recording Academy, and is a charter member and alumnus of SOLID.

ACM Spirit Award – Chris Stapleton has been chosen for the ACM Spirit Award, honoring the contributions of Merle Haggard, who received 20 ACM Awards in his career, including the Triple Crown Award. This award is presented to a singer-songwriter who is continuing the legacy of country music legend Merle Haggard by following their own path, crafting great songs, and epitomizing Haggard’s spirit through genuine performances and great storytelling.

The Kentucky native has maintained the traditional, outlaw edge of the genre with riveting singles including “Tennessee Whiskey,” “Nobody to Blame,” and “Starting Over,” while appealing to wider audiences with crossover collaborations including features on Taylor Swift’s “I Bet You Think About Me,” Adele’s “Easy On Me,” and more. An 8x Grammy and 13x ACM Award-winner, Stapleton’s monumental career has been lauded across every major music awards stage. Most recently, he won ACM Male Artist of the Year for the third time at the 57th ACM Awards. His highly acclaimed 2020 album, Starting Over, also won three awards at the 67th Annual Grammys (Best Country Album, Best Country Solo Performance, and Best Country Song), as well as Album of the Year at the 56th ACM Awards as both an artist and producer.

ACM Poet’s Award – Sonny Throckmorton and Shania Twain have each been chosen as recipients of the ACM Poet’s Award. This award is presented to a country music songwriter for outstanding and longstanding musical and/or lyrical contributions throughout their career, with special consideration given to a song or songs’ impact on the culture of country music.

Throckmorton’s songwriting career began in the late 1970s when he had 150 songs cut within a nine-month span. Between 1976 and 1980, a Throckmorton-penned song appeared on the charts almost every single week. Throughout his storied career, he had more than 1,000 songs recorded by an astounding list of artists, including Ray Charles, Merle Haggard, Alan Jackson, The Judds, George Strait, Tanya Tucker, and more. Throckmorton notched No. 1 singles with Johnny Duncan, The Oak Ridge Boys, and T.G. Sheppard. He also co-wrote classics such as Merle Haggard’s “The Way I Am,” Jerry Lee Lewis’ “Middle Age Crazy,” George Strait’s “The Cowboy Rides Away,” and The Judds’ 1984 ACM Song of the Year, “Why Not Me.” He has received countless accolades for his contributions to the genre, including Songwriter of the Year recognition from organizations such as NSAI (1978-1979), BMI (1980), and the DJs of America (1980). In 1985, Throckmorton was inducted into the Nashville Songwriter’s Hall of Fame.

Twain has established her career as one of country music’s most versatile songwriters, with instantly-recognizable hits and an undeniable crossover appeal that has earned her three ACM Awards and five Grammys. The release of her album The Woman in Me in 1995, featuring her breakthrough hit single “Any Man of Mine,” was awarded ACM Album of the Year at the 31st ACM Awards, the same year Twain took home the title of ACM Top New Female Vocalist. Twain became the first artist in history to release three consecutive diamond-certified albums and, with more than 100 million albums sold worldwide, she remains the top-selling female country pop artist of all time. Twain’s first album in 15 years, Now, was released in September 2017 and debuted at No. 1 on the Billboard Top 200 chart, making it the first female country release in over three years to top the all-genre chart.

ACM Film Award – Yellowstone has been chosen to receive the ACM Film Award, honoring the contributions of Tex Ritter, who was known for both his acting career and country music career. This award recognizes an outstanding television movie, series, or feature film released during the preceding calendar year which prominently features country music.

The SAG and PGA-nominated series is co-created by Oscar-nominated screenwriter Taylor Sheridan, along with John Linson. Andrea von Foerster serves as music supervisor, while Oscar-winning actor and seasoned musician, Kevin Costner, stars as John Dutton. The dramatic scenes and compelling music heard on Yellowstone have captivated audiences, introducing viewers to numerous country and Americana artists. Artists such as Zach Bryan, Hayes Carll, Turnpike Troubadours, Whiskey Myers, and ACM Award winner Lainey Wilson have all had their music featured in the show. The tremendous success of Yellowstone on Paramount Network has inspired multiple prequels: 1883 which stars Tim McGraw, Faith Hill, and Sam Elliott and made its debut in late 2021 on Paramount+; and the recently announced 1932, which is set to premiere in December 2022.

ACM Songwriter of the Year Award – Hardy was awarded the 57th ACM Songwriter of the Year Award. This award is presented to an individual known predominately as a songwriter, selected by a professional panel of judges composed of songwriters, publishers, producers, and PRO representatives. The Panel submits five nominees, at which time ACM members in the Artist/Musician/Producer/Engineer, Songwriter, Music Publisher/PRO and Record Company categories vote for the winner.

Hardy has emerged as one of country music’s most distinctive and creative talents, gaining career momentum through major cuts by Florida Georgia Line, Chris Lane, Blake Shelton, and Cole Swindell. His collaborative spirit most recently carried him to No. 1 as a songwriter and featured artist on Dierks Bentley’s “Beers on Me.” Hardy placed multiple songs, including “More Than My Hometown” and “Sand in My Boots,” on Morgan Wallen’s Dangerous: The Double Album, which won ACM Album of the Year in 2022. He has co-penned 11 No. 1 singles since 2018, including his own chart-topping, double- Platinum single “One Beer” featuring Lauren Alaina and Devin Dawson.