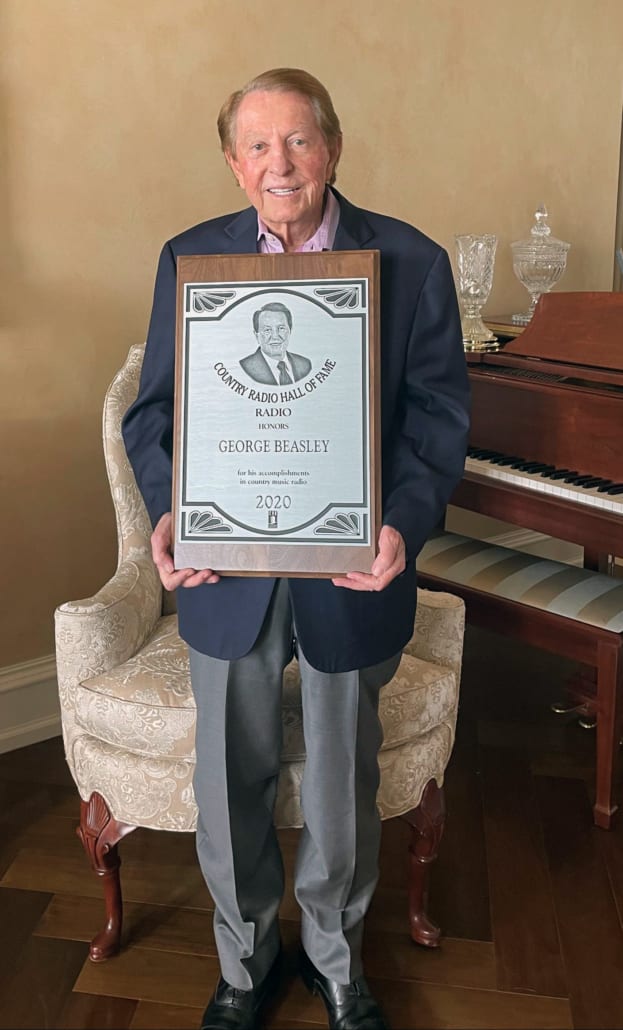 George Beasley was inducted into the Country Radio Hall of Fame in 2020.

Beasley Media Group Company Founder and Executive Chairman of the Board George G. Beasley passed away on Wednesday, June 2, 2021, in Naples, Florida. He was 89 years old.

Born on April 9, 1932, Beasley grew up working in the tobacco fields in his hometown of Ararat, Virginia. He enlisted in the Army, graduated from Appalachian State University, and moved to North Carolina in the late 1950s to become a high school principal and coach.

He built his first radio station (WPYB-AM) in Benson, North Carolina in December 1961. Over the next 60 years, his hard work and vision paved the way for what Beasley Media Group has become today – one of America’s premiere publicly traded media companies, consisting of 62 radio properties located in 15 large and medium-sized markets. Beasley stepped back from his role as Chief Executive Officer in 2016, but continued to serve as Executive Chairman of the Company’s Board of Directors.

An avid philanthropist, he served on the board of the North Carolina Association of Broadcasters (NCAB), and received numerous awards and accolades throughout his life. In 2020, he was inducted into the Country Radio Broadcasters Hall of Fame and received the Broadcasters Foundation of America Lifetime Achievement Award.

While best known for his many trailblazing achievements in the radio broadcasting industry, he will also be remembered for his kindness, integrity and work-ethic.

“George’s unconditional love for our mother, Ann and our family, along with his passion for the radio industry, helped to guide him throughout his lifetime,” said Beasley Media Group Chief Executive Officer Caroline Beasley. “A loving father, mentor, and friend, I will especially miss his incredible wisdom, keen insight and gentle smile.”

A memorial service will take place for family and friends in Naples, Florida. Details will be forthcoming. A private burial service will be held for the family in Ararat, Virginia. In lieu of flowers, the Beasley family requests donations be made in his name to The Broadcasters Foundation of America, 125 West 55th Street, 4th Floor New York, New York 10019. Online donations may also be made at www.broadcastersfoundation.org.