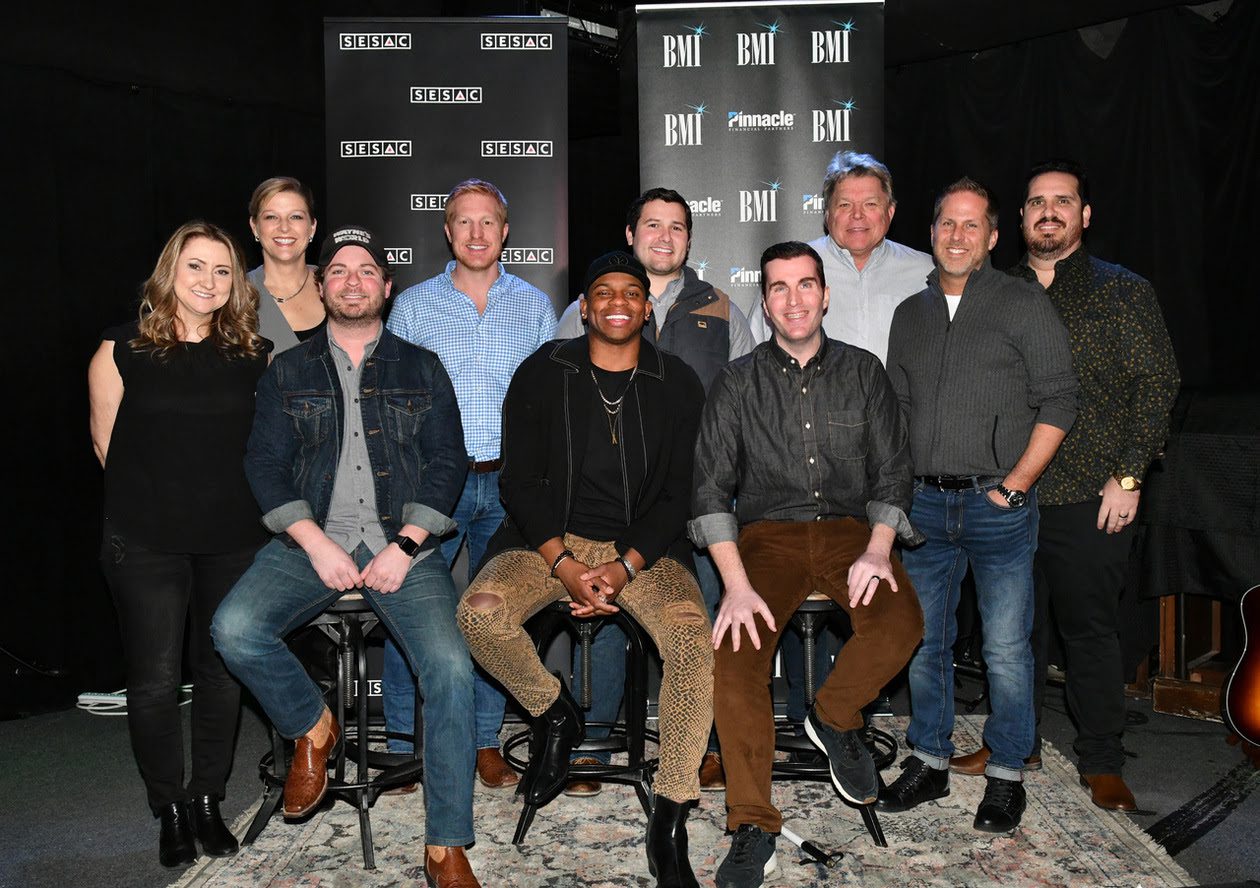 Jimmie Allen‘s friends and admirers packed the house on Tuesday night (Jan. 22) to celebrate his first No. 1, “Best Shot.” The track, produced by Eric Torres and Ash Bowers, was also a first No. 1 song for Allen’s co-writers, Major Bob Music’s J.P. Williams  and Josh London. The Wide Open Music writer and Stoney Creek recording artist was emotional as he acknowledged those along for his long journey to the top of the country charts.

Presented by SESAC and BMI, “Best Shot” was celebrated at The Local, the venue where Allen first earned the attention of BBR’s Jon Loba.

After spending two weeks at the top of the chart, “Best Shot” fell to No. 2, only to return the next week for its third week atop the chart. This is the first time since 2012 that a debut artist spent three weeks at No. 1 with their debut single. 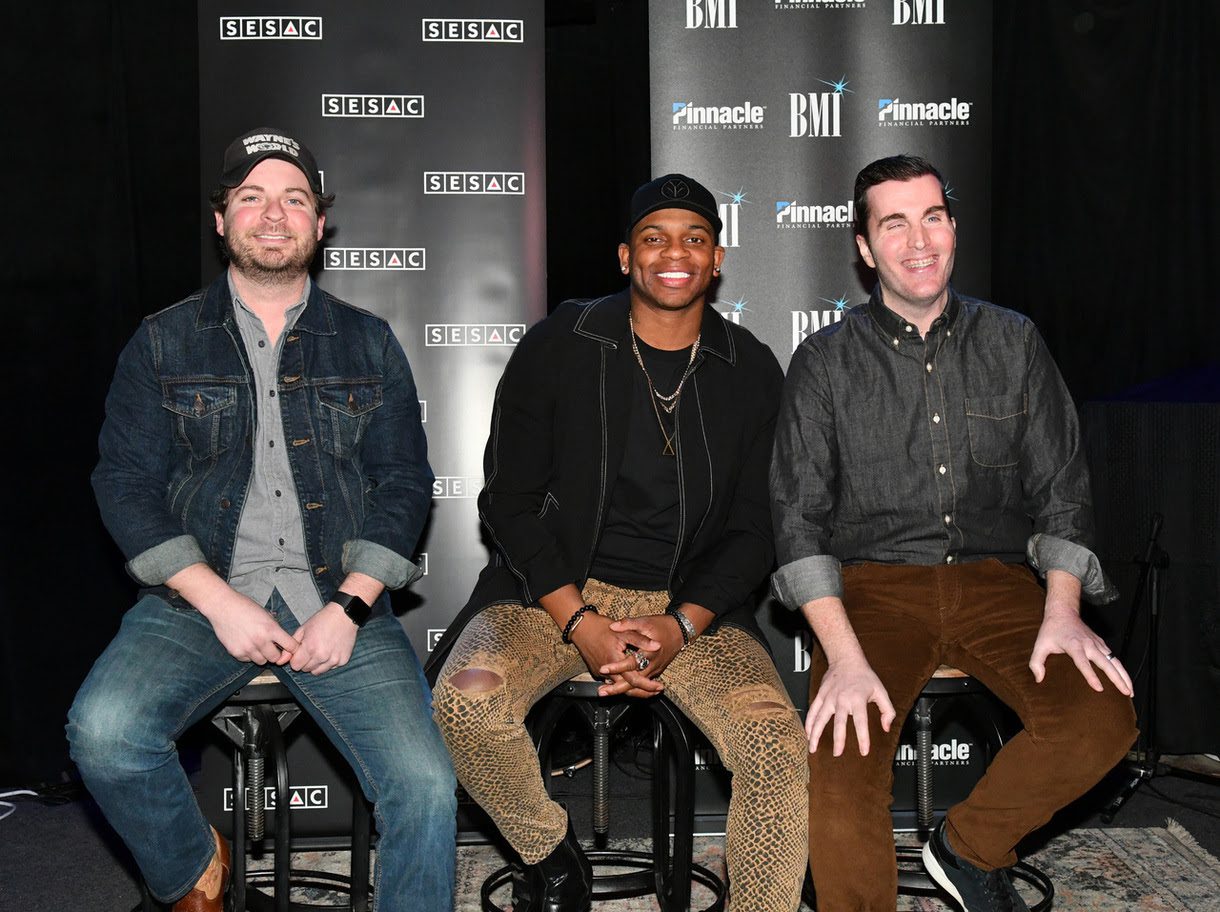 SESAC’s Shannan Hatch was on hand to emcee the event, as well as to congratulate SESAC writers London and Allen. “While most of us are all hitting the snooze button, Josh is up working landscaping on his first job,” Hatch said of London. “Then when the rest of us are getting up and [hitting] the road, that’s when he’s coming in and writing music. I can tell you that he is a super nice and funny guy. He’s a great writer and singer, and he’s an incredibly hard worker.”

“The moment I met Jimmie I fell in love with him and his music,” she added. “And it’s easy to do, he’s like this ray of sunshine. He played all over the place in Nashville, for anybody that would listen to him. He didn’t stop, he kept going. This was his dream and he pursued it.”

David Preston of BMI was there to present Williams with a Taylor guitar for first No. 1. “Talk about a bunch of underdogs that have really persevered,” he said. “Here’s a guy with a disability, he’s got one strike against him already, but he’s persevered and got the No. 1 song in the country.” Williams has been blind since the age of 10.

“[Jimmie] has a habit now of carrying $2 a day when he leaves the house and he finds somebody in need and he gives it to them,” Preston added. “I think that just shows the heart of this artist and really this whole team of guys up here.”

Allen’s publisher, producer and manager, Ash Bowers, thanked everyone who had a part in making “Best Shot” such a success, including his business partner and best friend Steve Williams. “I’ll be back up in a few minutes as manager and producer,” he joked as he joined Allen on stage.

“I met Jimmie less than three years ago at a writer’s round. He was working two jobs and trying to figure out a way to get in the business. I was trying to figure out a way to stay in it,” Bowers admitted. “It’s incredible to watch Jimmie not only be so creative but this guy gets up and creates relationships and maintains them with everybody because he cares. He cares about people.”

Major Bob Music’s Tina Crawford spoke candidly about the songwriters, saying, “I’m not going to cry, that’s usually my M.O. but I’m not going to do it. In July 2016, Jimmie signed his [publishing] deal with Wide Open. He walked across the street [to Major Bob], came in for his first co-write and it was with Josh and J.P.. They wrote not one but two songs that day. I would love to tell you that one of those songs was ‘Best Shot,’ but that would be a lie,” she quipped.

BBR’s Jon Loba summed up the gravity of the success, and recognized his radio promotion team at Stoney Creek. “This is a historic day, a historic song and a historic moment in our genre,” he said. “As everyone says, it does not happen without that promotion team so, Carson James, Byron Kennedy, our new National Director of Promotions Stan Marczewski, Lexi [Willson], Matt Vieira, Renee Leymon, Ashley [Wojcinski], Matt [Holmberg], Stephani [Waters] — the newest member who is a complete rockstar. That Stoney Creek staff is going to be one of the absolute best in this business, trust me.”

MusicRow’s Sherod Robertson presented the three with No. 1 Challenge Coins, as “Best Shot” reached the top of the MusicRow CountryBreakout chart in November of 2018. MusicRow named Allen as one of its “Next Big Thing” Class of 2019 for the 2019 Touring Issue.

“We’re big champions of the people that we report on,” Robertson said. “This song is about giving your best shot to a girl, but when you look at these lyrics, it really applies to all of us, too. You get scars, we all get scars. You strike out, we’ve all struck out in this business. You get knocked down, have any of you got knocked down? You get high…some of us get high. But what do you? You always give it your best shot.” 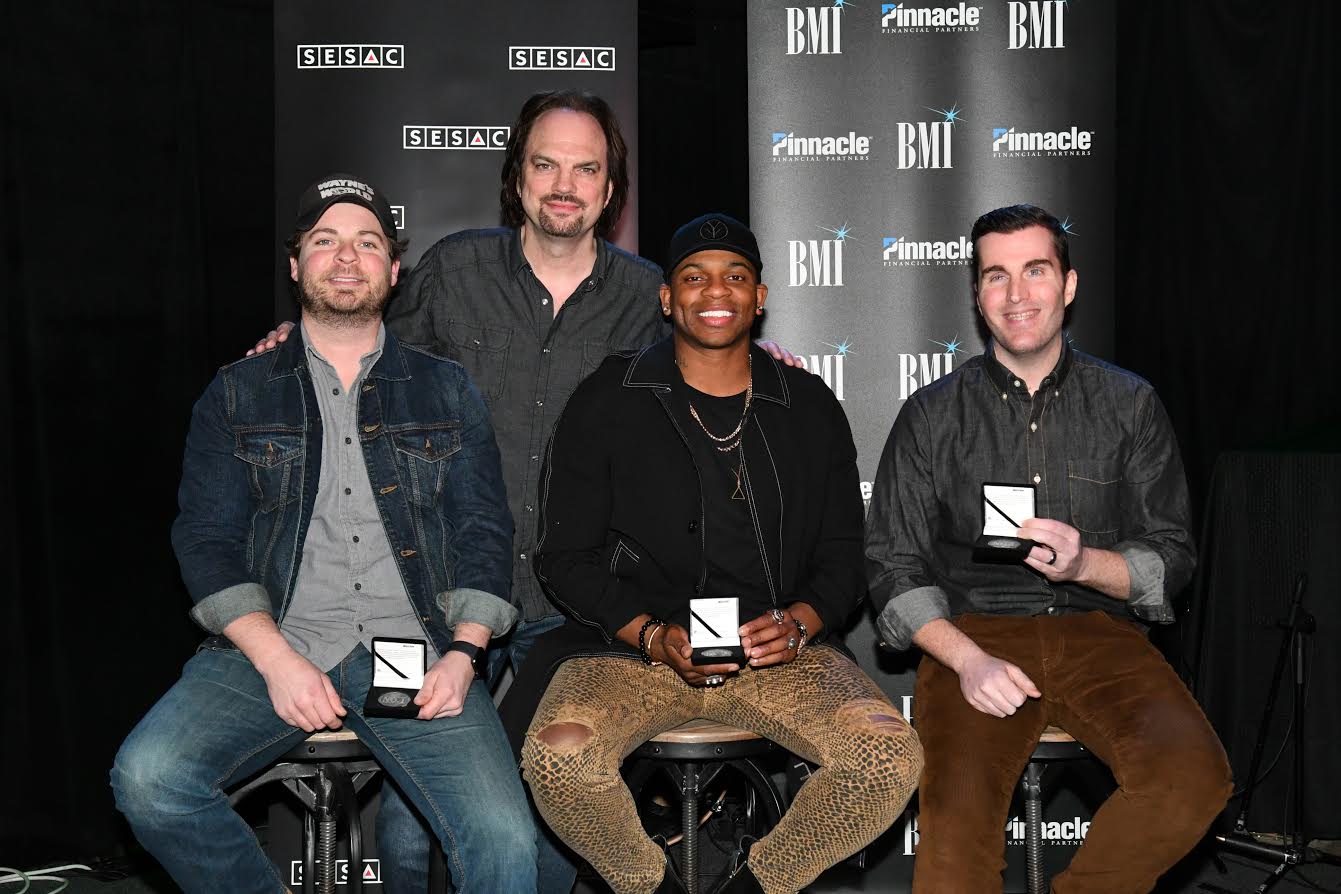 CMA’s Brandi Simms was on hand to give each writer their first No. 1 medallion from the CMA. “I want to thank everyone at BMI and SESAC for making this possible because CMA loves being apart of these celebrations. It’s such a big deal, especially when it’s your first No. 1.”

Country Aircheck‘s Lon Helton said, “We all know that breaking new artists and having new songwriters hit No. 1 is really the life blood of this industry and country radio. It takes so much work to get that debut single to No. 1. When you have a format that has a bunch of superstars turning out two or three, or sometimes even four No. 1s a year, to work that new artist up the chart just requires so much work.”

To honor that hard work, Helton and Country Aircheck presented plaques to Allen and the Stoney Creek staff.

“We recently came into a partnership with Wide Open and Jimmie, and we’re so thankful to be here,” said Sony/ATV’s Josh Van Valkenburg. He also announced that they had made a donation to MusiCares in celebration.

“Sitting up here is surreal because I’ve been to several of these and I would always sit out there and wonder ‘maybe one day,'” Williams said. “I have to thank my wife, Irene, along with Jesus is like the constant in my life. I have to thank Major Bob Music. They hung in there with me for a very, very long time and kept taking a chance on me.”

“I moved here 10 years ago this September with no intentions of writing songs,” London admitted. “I moved here to work for a company and then open my own. After meeting a few people in the business, I decided that I would give it a try about six years ago. I started writing and I wanted to write during the day because the better writers wrote during the day. I’m thankful that my attorney Noah McPike set me up with a meeting with Tina and Chandler over at Major Bob.”

When the man of the hour got to speak, he was deeply moved by the love and his journey.

“I moved to Nashville in 2007. I had a Chevy Malibu, a green one, and like $21 bucks. I’ve worked every job you can think of from janitor, over-night stock, server, [etc.] in the hopes of one day landing a deal.” He recounted how he met Ash Bowers after a cancellation at a writer’s round at [Nashville restaurant] Puckett’s  opened up a spot for him. “I at least get to play my songs, I get $200 and a free meal.” Bowers soon offered him a publishing deal. He then became Allen’s manager and producer. “It’s been a long journey. To find guys that believed in me meant a lot,” he summed, through tears.