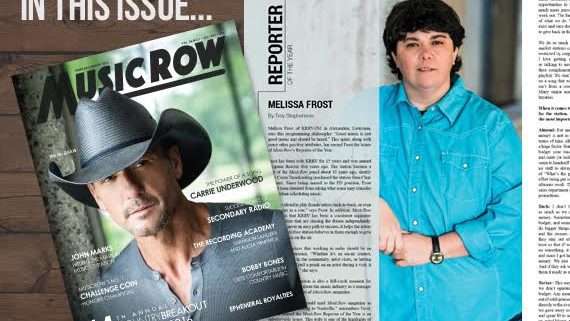 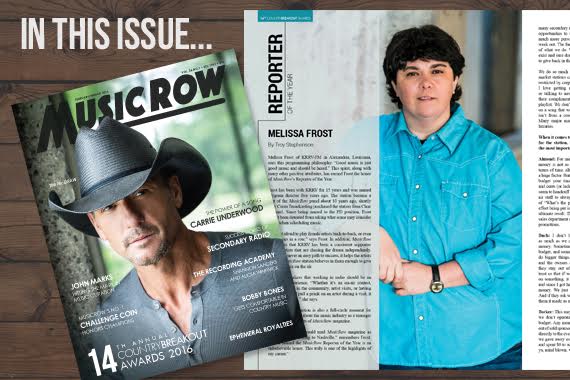 Melissa Frost is this year’s recipient of the MusicRow CountryBreakout Award for Reporter of the Year. She’s been at KRRV-FM in Alexandria, Louisiana, for 15 years, and has served as program director there for the last five years.

Prior to her visit to Nashville for Country Radio Seminar, she spent a few moments answering questions about her award-winning career for MusicRow.com

MusicRow: How and when did you get into radio?

Melissa Frost: I got into radio back in 2001 by pure accident, really! I’ve always been a fan of music and my love for country music and the history of the format has always run pretty deep! I always knew I wanted to be in the music business but radio never really crossed my mind. I’ve always had a love for the drums and I thought I was going to be a musician but one day my parents heard (what I call) the “help wanted” commercials and suggested that I give it a try and 15 years later here I am!

Other than KRRV, where else have you worked?

Frost: I’ve really only been on KRRV for the 15 years that I’ve been in radio. I’ve filled in on other formats within the company but my main focus has always been KRRV! As far as the company goes, the first five years I was in radio, the station was owned by Clear Channel. Then 10 years ago Cenla Broadcasting (a local company) purchased KRRV and its three sister stations. Combined with the stations that they already had, Cenla Broadcasting owns a total of eight stations.

What are some of the most memorable moments of 2015?

Frost: 2015 was a pretty memorable year as a whole! One of the events that stands out was our St. Jude Back to School Jamfest. It was the first time that KRRV had an event like this to benefit St. Jude Children’s Research Hospital. It was a free event that was geared toward helping to raise money for kids! There were games, face painting, food, etc. We had a silent auction and vendors to help raise money throughout the day and we finished the day off with a free concert from Brandon Holland and Erica Nicole.

For a first-time event, we were hoping for a nice crowd but we could have never imagined the number people that showed up to support the event and the artists! Personally for me to have come up with the idea, then watch it all come together and then see it turn into one of the biggest events that we’ve ever had, was a truly an amazing moment.

Why is your station and market so special?

Frost: KRRV is pretty special to a lot of people in this market! It’s a very unique station and a true heritage station in every sense! I grew up listening to the station and attending many of the events like Live In The Lobby and the Listener Appreciation Shows. Also another thing that makes KRRV special is the fact that we are a small-to-medium market but the station itself is a 100,000-watt station, so it really does appeal to the masses because of the coverage it has! We are a very locally-driven station and that really sets us apart!

What is your programming philosophy when it comes to music, promotions, etc.?

Frost: My programming philosophy is actually kind of interesting because I look at all the “old rules” of radio and say, “That’s great but let’s try this instead!” I’m not afraid to play female artists back to back, or even three in a row! Good music is just good music and should be heard! I think independent artists should be given a chance and I’m a firm believer in working with promoters, labels and artists to have successful events for your listeners. Most importantly, I think radio should be fun! Whether it’s an on-air contest, doing stuff in the community, having artist visits and even pulling your entire staff together to prank an artist when they stop by for a visit, it all should be fun!

What does it mean to you to be the MusicRow Reporter of the Year?

Frost: I’m extremely honored to be chosen as MusicRow Reporter of the Year! It’s kind of funny because when I was in high school I would buy the MusicRow magazines and read them from cover to cover because that was my way of connecting to Nashville and what was going on there. Since being in the business, I’d hope that one day I would just be considered for it and now to be selected by MusicRow for Reporter of the Year is an unbelievable honor! This truly is one of the highlights of my career. Thank you, MusicRow!