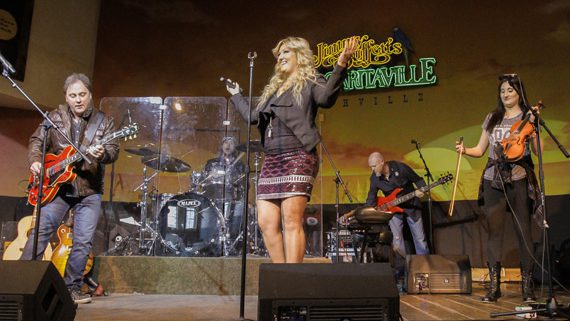 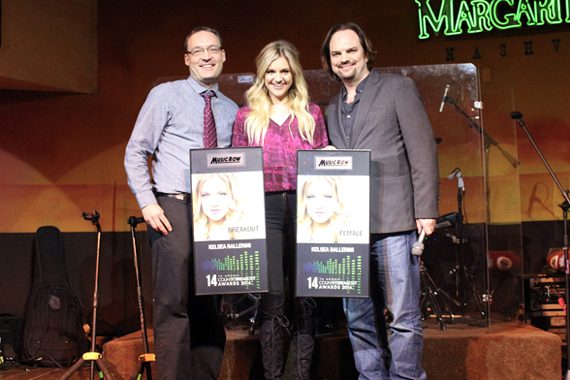 Let’s drop a few names right at the beginning, shall we?

MusicRow‘s Sherod Robertson, Craig Shelburne, Troy Stephenson, Jessica Nicholson, Eric T. Parker, Molly Hannula. Those are the people you need to know if you want to snag an invitation to the schmooze-a-minute whoop-de-do that is MusicRow magazine’s annual radio party and awards.

This event has historically been sardine-packed with attendees, so the organizers limited the number of invitations sent this year. Guess what? Everyone in the world RSVP’d, so it was still quite a crowd at Margaritaville on Monday afternoon (Feb. 8).

There was an impressive number of artists in this year’s throng. Billy Dean brought his protégé Jason Pritchett. Singer-songwriter Trent Summar was celebrating his new publishing deal with TenTen Music. Sierra Black was handing out cute lollipops with her picture in/on them. “Welcome to our 14th annual CountryBreakout Awards,” said Sherod. He introduced Craig Shelburne, since this is Craig’s first appearance at the event as MusicRow’s general manager.

Wasting no time, Sherod and Craig swung right into an award presentation. Capitol Records Nashville won Label of the Year for the 12th time. Eleven of those wins have been consecutive.

“Every year, we love coming here,” said the company’s Shane Allen. “Thanks for everything, and feel free to reach out to us at any time….We couldn’t do what we do on the MusicRow chart without Diane Richey Promotions.” The show’s first entertainer was Erica Nicole. She’s the first female artist to score three consecutive top-20 records on the magazine’s charts. Erica displayed a commanding stage presence, confident vocal belting and a feisty attitude. She wailed effectively on her rocking “I Listen to My Bad Girl” and kept the heat turned up on the potent “It’s Comin’ Down.”

Her first top-10 hit in MusicRow was “I’m Making Mine,” and she nailed the power ballad with plenty of oomph. Erica’s producer, Kent Wells, was in her band on guitar and backing vocals.

Sherod presented MusicRow’s Group/Duo of the Year award to Florida Georgia Line. “It’s an honor to be here,” said FGL’s Tyler Hubbard. “Thank you guys for being here. MusicRow radio reporters were the people who believed in us when no one else did.”

“We really do feel like the luckiest guys in the world,” added his partner Brian Kelley. “We’re more inspired than ever.” Republic Nashville’s promo v.p. Matthew Hargis posed the guys for a photo with the crowd behind them and asked everyone to raise their hands in a No. 1 salute. Florida Georgia Line were also awarded five MusicRow Challenge Coins for co-writing the No. 1 hits “Anything Goes,” “Sippin’ on Fire,” “Sun Daze,” “Dirt” and “This Is How We Roll.”

For the first time in MusicRow history, the Breakthrough Artist and Female Artist of the Year were awarded to the same person, Kelsea Ballerini. “This makes me feel a lot cooler than I actually am,” she quipped. “If you had told me that this would happen a year and a half ago, I probably would have fainted.” When presented with her Challenge Coin for co-writing “Dibs,” Kelsea posed adorably with it, pursing her lips in a smooch.

Male Vocalist of the Year winner Jason Aldean was unable to attend.

The Songwriter of the Year was a three-way tie, with Ashley Gorley, Shane McAnally and Josh Osborne each penning five chart toppers. “Congratulations to Shane and Josh,” said Ashley. “To be in their company is awesome.” Shane added, “I really appreciate everything MusicRow does. Thanks for putting this together.” Josh said, “This is a huge honor. We love sharing it with the MusicRow folks.” “This is the guy you all need to know, if you don’t already,” said Sherod in introducing Troy Stephenson, MusicRow’s chart director. All of the awards are based on activity on his weekly listings. “I’m thrilled with every single radio station that’s on our [reporting] panel,” said Troy. He presented the Independent Artist of the Year award to Erica Nicole.

“Thank you to MusicRow for making a platform for an artist like me,” she said. “Country radio, thank you for this moment. Thank you so, so much….I share this award with y’all.”

Troy announced Melissa Frost as MusicRow’s Reporter of the Year. She is the programming director at KRRV-FM in Alexandria, Louisiana.

“This is a pretty big honor,” Melissa began. “To all the females out there — keep doing your thing, because eventually it’s gonna pay off. It did for me.” She first learned about the music industry by reading MusicRow magazine as a teenager. How cool is that? The members of LOCASH were given Challenge Coins for co-writing their MusicRow No. 1 “I Love This Life.”

“This is our first Number One, and it feels fantastic,” said the duo’s Chris Lucas. “Country radio, I can’t thank you enough.”

“We’re singing; we’re having fun,” added his partner Preston Brust. “Country radio, you are friends and family. Thank you for being here.”

Chris and Preston fronted their rocking band on the throbbing new single “I Know Somebody.” The frothing, emotional “Ship Wrecked” was dedicated to Preston’s wife, who is a new mom. LOCASH’s set concluded with  the rolling, driving, joyous “I Love This Life.” 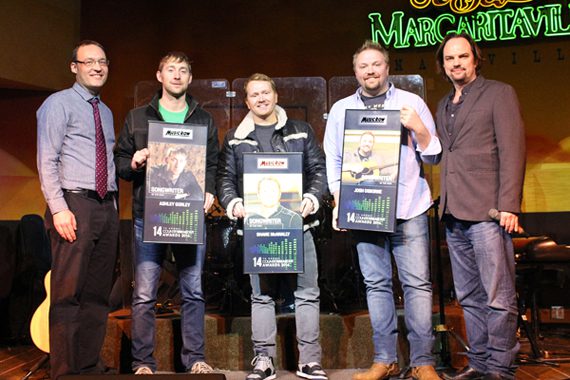