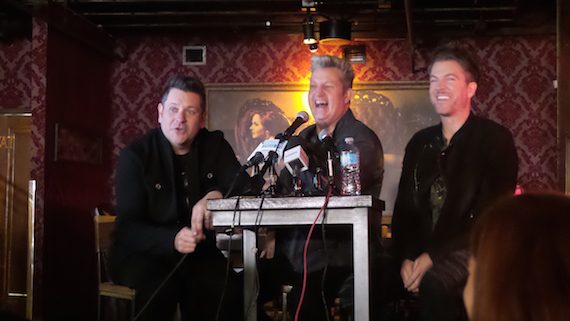 Rascal Flatts met with members of the country music media at The Sutler in Nashville on Friday morning (Jan. 29). They discussed their second Las Vegas residence, which will begin next month at The Joint at Hard Rock Hotel & Casino. The Joint seats approximately 4,000 people.

The band compared playing the smaller venue to their days playing as a bar band.

“We had gotten so used to playing amphitheaters and arenas that seat 15,000+ people,” says the band’s Jay DeMarcus. “It’s fun to do a more intimate show where it feels like we’re connecting with the crowd. We started out as a bar band. There are elements from those days that we talk about all the time that we miss. You can’t manufacture the feeling of connecting with a small crowd and connecting with every single person in the room. When we were just starting out playing covers down on Printers Alley, we could see the crowd dancing and knew what they wanted so we can feed off them. With an arena show, everything is more mapped out and you lose that spontaneity. With a crowd like we’ll have at The Joint, you can keep the spontaneity, some of that energy and some of that freshness.”

Tickets are available at the Hard Rock Hotel box office, or by calling 888.9.AXS.TIX or online at axs.com.