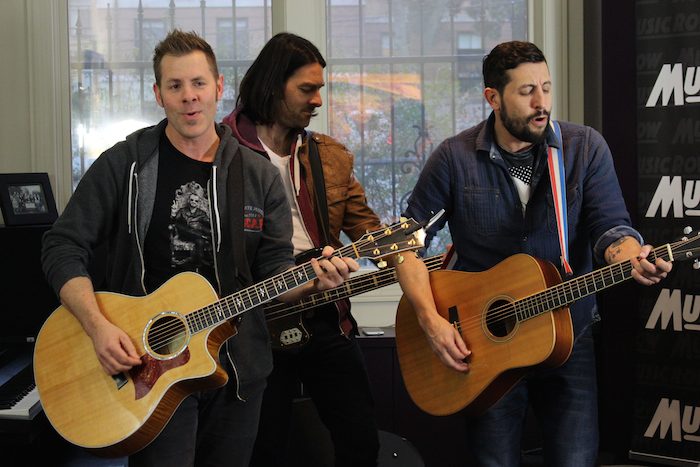 Nashville quintet Old Dominion, which includes Matt Ramsey, Trevor Rosen, Whit Sellers, Geoff Sprung,and Brad Tursi, has seen some of its members’ names on the country radio charts as songwriters with hits recorded by Kenny Chesney, Keith Urban, The Band Perry (“Chainsaw”), Dierks Bentley (“Say You Do”), Tyler Farr (“A Guy Walks Into A Bar”), and others.

Now, with their independently released, self-titled EP, the members are getting a taste of working the radio charts as an artist. The EP, released in 2014, boasted production from top-shelf songwriter-producer Shane McAnally. McAnally earned a Grammy honor last year, alongside Luke Laird and Kacey Musgraves, for his work on Musgraves’ Same Trailer, Different Park project.

The quintet stopped by MusicRow’s office to showcase three songs, including “Roll Around With You,” “Shut Me Up,” and current single “Break Up With Him.” All members of the group had a hand in writing “Break Up With Him.” “I think that makes it even a little more special for us, to have this song as the first single,” says Rosen.

Thanks to early airplay on SiriusXM, “Break Up With Him” piqued the interest of radio programmers across the nation, and several stations began airing the album cut late last year. Responding to demand for the song, the band’s management is rushing out the radio single, with an official impact date of Feb. 9.

The quintet has landed an opening slot on Chesney’s upcoming The Big Revival Tour this summer. The gig makes them the first independent act to ever be part of a stadium tour.

“For months we kept joking about going on the road with him, and then they said, ‘Well now that the Kenny tour is happening…’ and we couldn’t believe it,” said Ramsey. Thus far, the band has primarily played smaller venues, including opening for Chase Rice’s Ignite The Night Tour. “There’s no way to really prepare for something like stadium dates. We are just excited to get out there and play our music.”