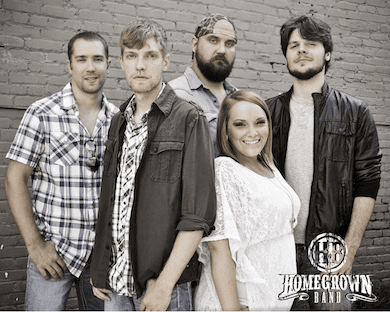 When you hear “Homegrown,” what comes to mind? Do you think of something tended year after year with patience and love? Maybe a crop, an idea, or a way of life that, after years of cultivation and care, rewards dedication with something precious?
When they settled on the name “Homegrown Band” in the spring of 2011, members Craig Brannon, Kevin Brannon, Jason Cole, Megan Blair, and Nick Ivey hoped their fans would associate them and their music with that sentiment. “As we were writing and branding ourselves,” says Jason, “we found that the recurring theme was ‘home’–our home, the South–and its culture, value system, and way of life. We were invoking the place and the things that our parents, their parents, and–generations later–we believed to be important enough to build our lives around. While ideas like fidelity, the virtue in hard work, true love, and the necessity of faith are quickly being written off as old-fashioned, they’ve been cultivated in us, and we think that they’re vital enough to write and sing about.”
The band’s down-home image and songs about life as they know it enjoyed success from the start. In early 2012, HB released their first album, a self-titled EP recorded at Skaggs Family Studios in Nashville, TN and produced by Jason Singleton of Red Hill Entertainment. The album’s first and only single, “This Ol’ Truck,” was featured on 94.9 The Bull’s Backyard Country for three weeks. Says Craig of the record’s success, “It was unprecedented. We were just starting up, had maybe a thousand fans on social media, and very little exposure. It was incredible to compete with more established artists like Colt Ford and Jake Owen and hang in there. We felt validated; we were relying completely on the strength of the song and holding our own.”
After spending months on the road in support of the EP, the band returned to the studio in February 2014 to begin work on a new collection of songs that would become their highly anticipated, independently produced debut LP, Summer Song. Recorded at the Rockporium in Canton, GA with co-producer and engineer Andy Bowen, the album is the first to feature what the band members call ‘our sound.’ According to guitarist Nick Ivey, that was the goal from the start. “This is the first album we’ve done where we share a production credit,” states Nick. “The idea going into it was that we would have a voice in the album’s sound and feel–that we would be constantly pursuing something fresh both for us and for country fans. We’ve got a pretty eclectic group with varied musical backgrounds, and we tried to pull from all of that. We feel that freeing ourselves up to contribute to the arrangements of these songs allowed us to come across a really representative and original sound.” The album’s first single, “I’m Gonna Be Me,” perfectly captures this experimental approach, placing a country weekend anthem over a rock-infused dancehall groove. Released January 2015, the single was well received by radio and fans; “I’m Gonna Be Me” spent 21 weeks on the Music Row Country Breakout chart and 6 weeks in the Top 80.
Building on the single’s growing momentum, the band released the new album, Summer Song, June 27, 2015 with a release party in their hometown of Carrollton, GA. Since the album’s release, the band has pushed a second single, “She Loves to Ride,” to Music Row and Indicator stations throughout the country. Additionally, the band is currently touring in support of the album with dates scheduled through the end of 2015. Be sure to check the tour calendar and follow the band’s social media accounts for updates and the latest HB news.