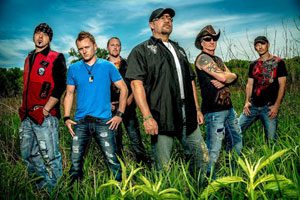 Looking for a dynamic country rock band that is sure to bring the crowd to its feet? Then look no further than Jamie Campbell and the Redneck Romeos! Established in 2011, these five musicians quickly made their mark in the Rockford, Chicago land and southern Wisconsin areas. “Crowd pleasing” describes them best – Jamie’s energetic stage presence, charming antics, and strong vocals engage audiences everywhere, making every performance a memorable one.
Jamie has personally opened for several national acts, including Justin Moore, Jamey Johnson, David Allan Coe Band, and Randy Houser, and he has performed at venues such as Cadillac Ranch in Nashville, Tootsies,Stage and more. He is a favorite on the Broadway Circuit in Nashville. This commercial music venture follows Jamie’s success in the CMT competition, Nashville Star.
Jamie is joined on stage by Mike Armato on drums, Jacob Addis on rhythm guitar, Mike Hysmith on bass, Tim Sanford on Lead Guitar and Jason Bruner on Vocals and Rhythm. all who have previously opened for national acts during their individual musical careers.
The band’s original music has an edgy flare, but still stays within country limits, Jamie Campbell and the Redneck Romeos take country to a whole new level – you won’t want to miss them!
www.jamiecampbelltheredneckromeos.com
Facebook