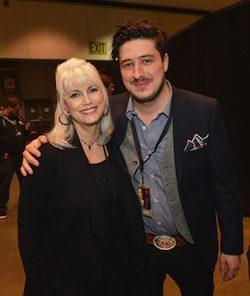 Emmylou Harris and Mumford & Sons’ Marcus Mumford at the 2013 MusiCares Person of the Year tribute to Bruce Springsteen on Feb. 8 in Los Angeles. Photo: Rick Diamond/WireImage.com

Grammy ratings fell from last year’s high of more than 39 million viewers to about 29 million for last night’s (Feb. 10) primetime show (8-11 p.m). The slip was expected due to 2012’s ceremony drawing a 30-year ratings high, spurred by the death of Whitney Houston the night before.
Last night’s show on CBS attracted 28.4 million viewers for the full show (8-11:30 p.m.), the second-highest since 1993. The show received a 10.1 rating among viewers in the advertiser coveted age group of 18 and 49, topping every Grammy telecast since 2004.
Ratings according to Zap2It.com.
• • • •
Tim McGraw and Faith Hill, Zac Brown, Kenny Chesney, Natalie Maines and Elton John were among the performers who saluted Bruce Springsteen as MusiCares Person of the Year at a Grammy week ceremony. More from EW.
• • • •
Emmylou Harris and Rodney Crowell recruited a slew of star guest performers for their Saturday (Feb. 9) night show at the Los Angeles Troubadour. They were joined by Joan Baez, Bonnie Raitt, the Zac Brown Band, J.D. Souther, Damien Rice, Joan Osborne, Shannon McNally, John Fullbright and Shawn Camp, reports the LA Times.

• • • •
Snoop Dogg decided the BMI panel “How I Wrote That Song” was a good place to light up a doobie on Saturday. He was a panelist at the Grammy week event at The Roxy alongside Luke Laird, Busta Rhymes, B.o.B. and Evan Bogart. Get the buzz from The Hollywood Reporter. 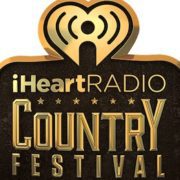