The Society of Leaders In Development (SOLID) is celebrating its 15th anniversary during “SOLID September” with events highlighting its most important initiatives: education, outreach, and networking.

Networking
“SOLID has been growing leaps and bounds since it started in 1997,” explained SOLID Pres. Jon Romero during a recent interview. “It has evolved every year with different groups of members, but its goal has always been the same, to bring together young industry professionals.”

Founding member Chris Neese recalled the meetings that led to the organization. “A small group of friends gathered to discuss our future. We saw a need to bring aspiring music industry professionals together to create strong social networks, provide education training, promote leadership, and inspire community involvement. Our solution was SOLID.” The group debuted with a party at the Country Music Hall of Fame.

Accordingly, the 15th Anniversary Reception will be held at the Hall of Fame on Tues., Sept. 25, 6:30 – 8:30 p.m., where highlights will include interviews with SOLID alumni and an awards ceremony.

Most SOLID events combine networking with education or outreach, as is the case with tomorrow’s (Tues., Sept. 11) Food Truck Frenzy. Running from 11 a.m.- 2 p.m. at the SESAC parking lot, 10% of the profits will benefit the charity Linda’s Hope, which fights pancreatic cancer.

Education
Anniversary events kicked off on Sept. 4 with a Conversation with Gene Simmons and Doc McGhee. “Every year we set the bar higher and higher,” said Romero, who works at Vector Management. “It was the biggest panel we’ve put together and it happened thanks to our members’ hard work and connections.”

Throughout the year, the group’s education initiatives include quarterly SOLID After-Work Shops. “We are always bringing in industry leaders for direct dialog with our members,” explained Romero of the panels. “We try to put them in a small setting so our members can ask questions and bounce ideas off of them.”

Outreach
Outreach opportunities focus on serving the community at large, as well as music business college students. To that end, this month SOLID is organizing a Job Shadow Day on Thurs., Sept. 20, and a Habitat For Humanity Build on Sat., Sept. 15.

SOLID is a 501(c)(3) nonprofit organization with annual fundraisers including Big Brothers Big Sisters Bowl for Kids’ Sake, and the SOLID Yard Sale held during CMA Music Festival. “This year we’ve given away $50,000 to different charities,” said Romero. “That’s leaps and bounds over last year’s $18,000. We want the industry to know we are doing a lot for the community with our sweat and action by our members. There are a lot of legs coming out of SOLID, such as Women Rock For The Cure, and Buds-N-Suds for Crohn’s and Colitis.” Both groups have roots among SOLID members and have since become stand alone charities.

“We set the bar and then reach over it,” summed Romero. “In the next 15 years I hope that we continue to build our reputation on Music Row and that the executives continue to seek our members and know the value of the organization.” 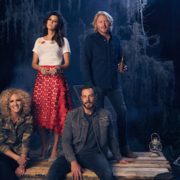