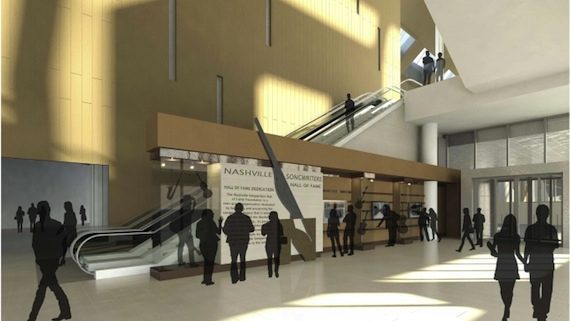 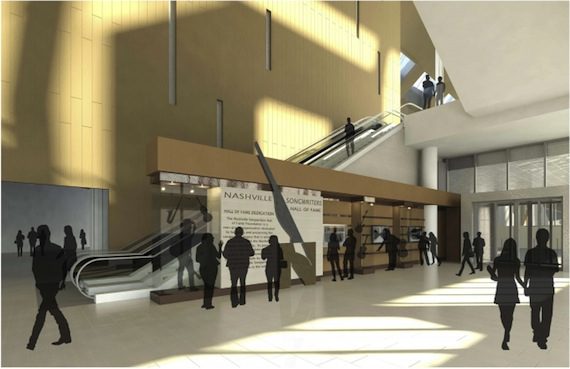 The Nashville Songwriters Hall of Fame will have its first home in the Music City Center. The space will be complete when the convention center opens in the spring of 2013. The Nashville Songwriters Hall of Fame will be located in the lobby adjacent to Sixth Avenue and facing Demonbreun Street. It will feature songwriting artifacts as well as three 55″ touch screens that will allow visitors to access sound, video, information on inductees and NaSHOF history. Tuck-Hinton Architects will handle the project.

The names of Hall of Fame members will be engraved in a special outdoor Songwriters Square at the corner of Fifth Avenue and Demonbreun, and on the stone steps leading from Fifth Avenue up to the interior display.

Mayor Karl Dean joined Hall of Fame songwriters Wayland Holyfield, Pat Alger and Kye Fleming and convention center officials today to make the announcement. “The music industry is a vital part of Nashville’s unique culture, and songwriters are often the ‘unsung heroes’ of the business,” Mayor Dean said. “This location at the Music City Center is a fitting space to honor songwriters and their creativity, and it gives both local residents and visitors from out of town yet another reason to stop by our new convention center.”

The Hall of Fame has a long-term agreement with the Convention Center Authority of Nashville and Davidson County that requires the Hall of Fame Foundation to be responsible for the cost of design, construction, installation, upkeep, repair and maintenance of its exhibit and related premises.

The Hall of Fame Foundation, a non-profit organization, will launch a capital campaign Oct. 7 at its annual Songwriters Hall of Fame Dinner and Induction Ceremony. Early contributions from board members, industry leaders, ASCAP, BMI, SESAC, Sony/ATV, Warner/Chappell and Universal have already laid the groundwork for construction. John Van Mol is chairman of the Foundation’s board of directors.

The Nashville Songwriters Hall of Fame will join the Omni Nashville Hotel and the Country Music Hall of Fame in the Music City Center. The 1.2 million square feet center is under construction on a 19-acre site.