The best and brightest in roots music gathered at Nashville’s Ryman Auditorium last night (9/13) for the Americana Music Association’s 11th annual Americana Honors & Awards, presented by Nissan. Gillian Welch and her musical partner Dave Rawlings, who were unable to attend, picked up two of the evening’s biggest honors. Relative newcomers The Civil Wars (who won New/Emerging Artist in 2011) and the Alabama Shakes each went home with new awards, and the Guy Clark tribute album This One’s For Him (produced by Tamara Saviano and Shawn Camp) took Album of the Year. A full list of winners and honorees appears below.

The Americana Honors & Awards also aired live on AXS TV, NPR.org, Sirius XM and WSM. On November 10, Austin City Limits on PBS will broadcast an edited version of the program.

Album of the Year: This One’s For Him: A Tribute to Guy Clark; produced by Tamara Saviano and Shawn Camp

Artist of the Year: Gillian Welch

Duo/group of the Year: The Civil Wars 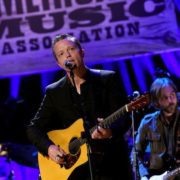