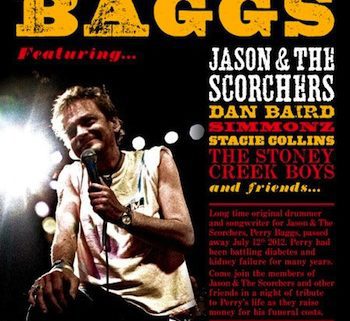 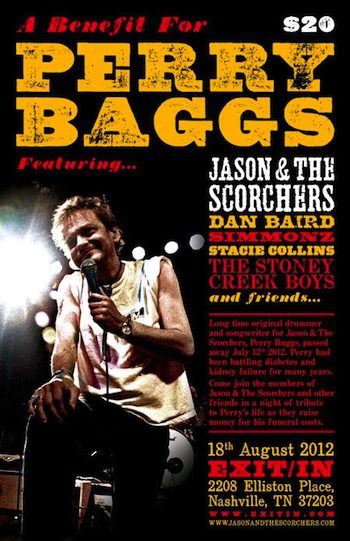 A memorial service for late Jason and the Scorchers drummer Perry Baggs will be held Aug. 20, 6 p.m. at Scottsboro First Baptist Church, 5253 Old Hickory Blvd., Nashville, TN 37218. The church will provide a meal and asks attendees to bring a dessert to share.

As previously reported, a tribute concert and fundraiser headlined by Jason and the Scorchers is set for Aug. 18, 7 p.m. at the Exit In. Proceeds will go to Baggs’ burial expenses. Tickets at exitin.com.

Baggs’ longtime girlfriend Katrina Cornwell is coordinating fundraising. A Pay Pal account is set up under [email protected], and First Tennessee Bank has an account named “memorial of Perry Baggs III.” Donations via check or money order can be mailed to Cornwell. Reach her on Facebook or by email.

• Musicians On Call’s Young Professionals Committee and Tin Roof Nashville will present Rumble at the Roof on Sat., Aug. 25 from 4 p.m. – 9 p.m. Games will include giant inflatable obstacle course, dunking booth, Minute-to-Win-It games, ring toss, Foursquare and Twister. Tickets are available here and include one drink, a t-shirt and unlimited games for the first 200 ticket buyers. This is a 21+ event.

• The Hate Cancer Music Event at Mercy Lounge presented by Lightning 100, the Nashville Scene and Carnival Music is scheduled for Thurs., Aug. 2 at 6:30 p.m. Artists set to perform include Pageant, The Granny Whites, Madeleine Slate, Orleck, Mando Saenz, Jen Foster and surprise guests. There will be food from Moe’s Southwest Grill. The event will benefit the American Cancer Society of Middle TN. Tickets and details at www.mercylounge.com.

• On Aug. 28 at 7 p.m. The Mocha Club is hosting a 7th birthday bash at Rocketown with performances by Dave Barnes, Matt Wertz, Drew & Ellie Holcomb, Ernie Halter, Parachute and more. The Nashville-based nonprofit organization is made up of members who give up the cost of a few mochas, about $7, to fund relief and development projects in Africa.

• Neal McCoy has joined ChildFund International’s LIVE! team with Thompson Square, David Archuleta, PFR (Pray for Rain), and County Throwdown Tour. McCoy is sponsoring a child from the Philippines through the organization which ensures children have access to education, clean water and health care.

• Registration is open for the 13th Annual Miller Harris Golf Tournament. The event is set for Mon., Sept. 10 at Temple Hills Golf Club in Franklin, TN. Register here. For more information on playing in the tournament, volunteering, or becoming a sponsor call 615-479-8525 or email [email protected].