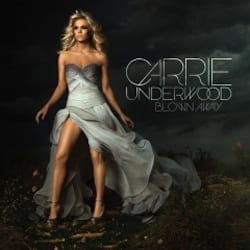 Carrie Underwood appeared on Good Morning America this morning (5/1) to promote today’s release of album, Blown Away, and share news of her fall headlining tour. The Blown Away Tour will trek across arenas in North America, and encompass an international summer run sponsored by Olay. Her first-ever UK concert will be June 21 at London’s prestigious Royal Albert Hall; it sold out in 90 minutes. Additional international concert dates will be announced soon.

The North American tour dates will be presented and hydrated by vitaminwater®, sponsored by Olay, and promoted by AEG Live. Special guest Hunter Hayes will open. The itinerary includes a stop at Nashville’s Bridgestone Arena on Sept. 23.

Underwood is donating $1 from each ticket sold on the North American leg of The Blown Away Tour to Red Cross disaster relief.

Her two previous headlining tours, 2008’s Carnival Ride Tour and 2010’s Play On Tour, performed for a combined total of nearly 250 shows with 2.2 million fans in attendance, and she wrapped both years as the top-ranked female country touring artist.

Tickets will be available for The Blown Away Tour beginning Friday, May 11. Please go to www.carrieunderwood.fm for on-sale information.