Music Row came together to toast the team behind Blake Shelton’s four-week No. 1 hit “Honey Bee” at a shindig co-hosted by BMI, ASCAP and Warner Music Nashville at the latter’s offices on Sept. 8. Written by longtime friends Rhett Akins and Ben Hayslip, it is the fourth consecutive chart-topper for Shelton, and his ninth overall.

Akins and Hayslip have now both written six songs recorded by Shelton, including another No. 1, “All About Tonight,” which they penned with frequent collaborator Dallas Davidson. Together, the trio of Georgia-bred tunesmiths are known as the Peach Pickers.

Shelton’s remake of the classic song “Footloose” is now available on AOL and AOL’s The Boot. The track is from the Footloose soundtrack, set to be released Sept. 27. Shelton also debuted his music video for “God Gave Me You” recently at www.BlakeShelton.com, which includes a never-before-seen testimonial from Miranda Lambert shot before their May wedding. 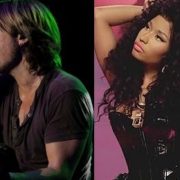 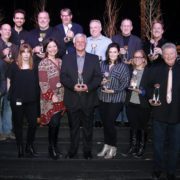