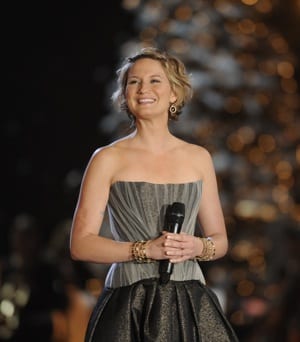 For the second consecutive year, Jennifer Nettles of Sugarland will host CMA Country Christmas, set to air on the ABC Television Network during the upcoming holiday season.

The show will tape in front of a live audience on Thursday, Nov. 10 at the Bridgestone Arena in Nashville. This is the evening following the Nov. 9 CMA Awards, which will also take place at the Bridgestone. Performers, television airdate, and ticket information will be announced soon.

In 2010, the first CMA Country Christmas drew an average audience of 7.3 million viewers in its first airing on Nov. 30, 2010, topping original programming on NBC and FOX by wide margins. The special re-aired on Dec. 22, 2010, reaching another 4.25 million viewers, for a combined total of more than 11.5 million viewers.

Robert Deaton is the executive producer, Paul Miller is the director, and David Wild is the writer.