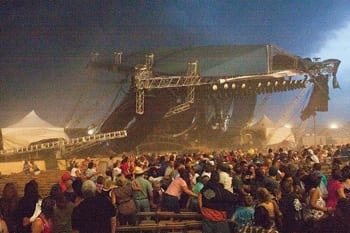 A seventh fatality from the stage collapse at the Indiana State Fair was confirmed this week. It is unknown how many fans remain hospitalized. Sugarland, who was scheduled to perform at Indiana, resumed its tour over the weekend, opening the first show back on the road with a moment of silence.

Meanwhile, a class-action lawsuit claiming negligence has been filed by against the state of Indiana, promoter Live Nation, and stage rigging company Mid-America Sound Corp. An Indiana judge has ordered the state to preserve the wreckage from the staging in case it is needed for further investigation.

On a tiny positive note, the kidneys of the seventh Indiana victim, a 24-year-old, were donated to others.