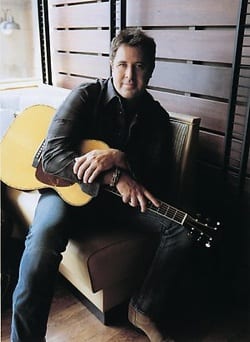 Vince Gill will get a star on the Hollywood Walk of Fame as part of the 2012 class of inductees alongside Jennifer Aniston, Jennifer Lopez, David Foster, Heart and others. Gill, who moved to Los Angeles at age 19, has long had an affinity for the city. Today he recalls, “When I lived out there, I was such a young person that I hadn’t really accomplished much of anything. So even the thought of one day having a star on the Hollywood Walk of Fame was preposterous. It was silly. It wasn’t even in the realm of my thinking.”
The first time he performed in Los Angeles was at the famed Troubadour. He played in Sundance, a bluegrass group fronted by Byron Berline that opened for Guy Clark. “It turns out Emmylou Harris was there, and Rodney Crowell and Guy Clark,” he says, “all of these people that I had no idea how they would shape my future. There they were right off the bat, and we hit it off.”
Even today as Gill preps for the fall release of his new album Guitar Slinger, he remains close to those bluegrass roots. Tonight (6/23) in Nashville he is kicking off the Bluegrass Nights at the Ryman concert series. Others set for the string of shows are Ricky Skaggs & Kentucky Thunder (June 30); Sam Bush with The Josh Williams Band (July 7); a Bill Monroe 100th Birthday tribute with Doyle Lawson & Quicksilver, Bobby Osborne & the Rocky Top X-press and Sierra Hull & Highway 111 (July 14); Dailey & Vincent with Joe Mullins & The Radio Ramblers (July 21); and Doc Watson (July 28). More info at ryman.com.