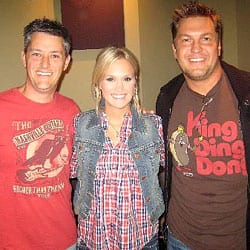 Tony & Kris’ "Star A Day" promotion continued this week when Carrie Underwood stopped by to chat with the guys about marriage and her thoughts on reality shows like American Idol. (L-R): Tony, Carrie and Kris.

SPIN ZONE
It’s a tough chart week for record promoters, because there isn’t much moving at the moment. Darius Rucker’s “Come Back Song” holds strong at No. 1, but Sugarland’s “Stuck Like Glue” and Taylor Swift’s “Mine” are both beginning to encroach on it. Positions 1-6 remain unchanged from the previous chart, with Brad Paisley, Zac Brown Band, and Trace Adkins all getting a slight bump as George Strait drops back to No. 10. The lone new entry into the Top 20 comes from Sunny Sweeney, whose “From A Table Away” moves to No. 19.

Despite the generally slow movement, a handful of singles seem to be gliding through with relative ease. Tim McGraw’s “Felt Good On My Lips” and Toby Keith’s “Bullets In The Gun” are making quick work of the chart after only four weeks at No. 23 and No. 26, respectively. Just behind and threatening to overtake them is Lady Antebellum’s “Hello World,” which packs on the week’s biggest spin increase of 322 and moves to No. 29.

Sara Evans makes a welcome return to the CountryBreakout Chart with “A Little Bit Stronger,” earning the week’s highest debut at at No. 71. Also making first appearances are Little Big Town’s latest “Kiss Goodbye” at No. 72, Bellamy Brothers’ “Back In The Day” at No. 73, Mary Chapin Carpenter’s “The Way I Feel” at No. 79, and Jewel’s “Ten” at No. 80.

LIFENOTES
MusicRow offers its condolences to family and friends of Sony Nashville VP Promotion Skip Bishop, after the passing of his mother Grace Kappes Bishop on Monday (10/11). Funeral services were held yesterday (10/14) at the Wetumpka Depot Theater in Wetumpka, Alabama. In lieu of flowers, memorial contributions may be made to: 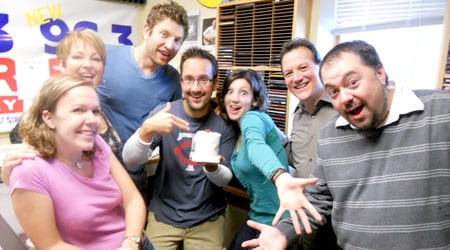 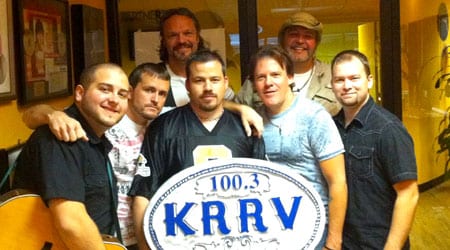