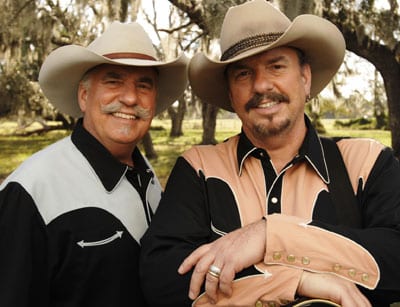 The latest single from legendary duo the Bellamy Brothers is “Back In The Day,” a rocking little slice of nostalgia that yearns for the simplicity of younger days. This single is the followup to the Howard and David Bellamy’s controversial “Jalapenos,” which proved a little too topically hot for U.S. radio stations but its video has amassed over a million views to date on YouTube. See the video at http://www.youtube.com/watch?v=B4j_9IQ6wzk.

The intrepid brothers recently took off for Europe and recorded new music with Swiss singing sensation Göla, releasing a new single and album (Bellamy Brothers and Göla) that debuted at No. 1 on the Swiss charts. The two artists will join Gola for a European tour in December 2010, that will also include appearances on European radio and television.

With a career that spans over 30 years, the Bellamy Brothers have enjoyed success in the pop and country genres with smash hits like “Let Your Love Flow” and “If I Said You Had A Beautiful Body (Would You Hold It Against Me).” They continue to tour regularly, logging over 200 dates per year in the U.S. and overseas.