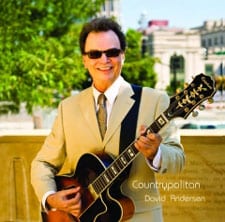 Guitarist David Anderson is set to perform his 3000th show at the Country Music Hall of Fame And Museum on Wed., Oct. 27 at 12 pm. The iconic strolling six stringer has performed regularly at the Hall for the past nine years, strumming out over 300,000 tunes and entertaining visitors from 82 nations around the globe.

“People ask me to play their favorites every day,” said Andersen. “When you’ve played a song thousands of times, you start to hear variations on the theme, and new melodies will come out.” This experimentation and evolution was the driving force behind Anderson’s decision to record new versions of some of the classics most requested at his performances. The album, Countrypolitan, also includes guest performances from Anderson’s personal hero, guitar legend Harold Bradley. Also included on the disc, which is available at the museum gift shop, are salutes to six string masters such as Les Paul and Chet Atkins.

“It was an honor to recompose new music based on the themes of the masters,” said Andersen. “I spent a lot of time writing out the melodies on sheet music, shifting things around, moving the accents.” In the process some song titles were changed, too. Tennessee Waltz was turned into a jailbird ballad Tennessee Walls and western movie theme, Ghost Riders In the Sky became a song about a lost car racing legend, aptly titled Ghost Rider.