Terrestrial radio, like many media properties, has recently faced sobering economic challenges, not the least of which could be a fast approaching showdown with Internet radio. There are those that cry the sky is falling for terrestrial radio—because Internet radio in cars is already on the horizon and because the costs of setting up a pure-play online signal are significantly lower than the cost of entry into the land-based radio business.

However, radio’s future may still be very much alive. “One of Internet radio’s greatest challenges has been brand awareness,” says a Bridge Ratings Report titled Is Terrestrial Radio Ready For A Digital Future? “Compared to its terrestrial simulcast brothers whose Internet brands are well-known to a good percentage of its AM/FM audience, pure-play Internet radio can get lost in the mix of over 65,000 streams around the world.”

But the Bridge Ratings report warns that social media networking can be very effective and warns stations that fail to harness its power of being left behind. “Terrestrial radio management in general seem to be getting the message that leveraging the Internet’s tools to further its business is a critical component of future growth and success. Intellectually it is clear. In the old days, the speed of change was manageable in an environment where the ability to act was sometimes detained due to operational limitations. In 2010 the luxury of waiting to act is more of a detriment.” The Bridge Ratings study cites that 91% of Americans own cell phones and names Internet radio streaming as the fourth most popular activity used with those phones after social networking (29%), text messaging (25%), and Tweeting (22%).

Edison Research VP Tom Webster’s recent study (with Arbitron) The Infinite Dial 2010 claims, “The Internet has nearly usurped radio as the primary source for music discovery.” Webster comforts programmers saying they too can, “put up a website.” He also adds, “The curation of music is still based upon credibility and branding. Terrestrial radio brands have every bit as much right to earn and retain a credible claim to an image for music discovery as Internet outlets.” He cites music discovery as being important because, “Music is important.”

What Are You Waiting For?

Bridge Ratings spoke with 242 GMs at the top 150 radio markets to find out what might be preventing them from transitioning or transitioning faster toward a digital future. Budget was the most popular response (92%). Another concern was “having the know-how or specially trained personnel dedicated to digital efforts (91%).” However, considering the stacks of research which prove the growing importance of a coordinated digital strategy, should these answers be viewed as justifiable roadblocks, or merely excuses for poor implementation?

Country Radio Broadcasters, which will host its annual CRS country radio event again on March 2-4, 2011 recently held a One-on-One event devoted to New Media marketing opportunities. It’s encouraging that CRB is using its leadership role to focus on the future. According to its new website, CRB’s event is “an annual convention designed to educate and promote the exchange of ideas in the Country music industry.” One can only hope that included in the CRS 2011 Agenda will be ample time devoted to understanding the challenge of Internet radio, social networking and discussion of various strategies for leveraging your brand and staying competitive in this about-to-explode new marketplace.

According to CRB Executive Director Bill Mayne, “The 2011 agenda is taking shape, but not yet complete.” Mayne insists however, that social networking and Internet Radio are on the Agenda Committee’s radar. That’s great news, because country radio’s support for the country music industry remains critical and the record industry has a vested interest in its continued health. But just like Gulf Coast store front owners who board the windows when a hurricane approaches, country radio had best begin facing tomorrow head on, lest the future sweep it off its feet. 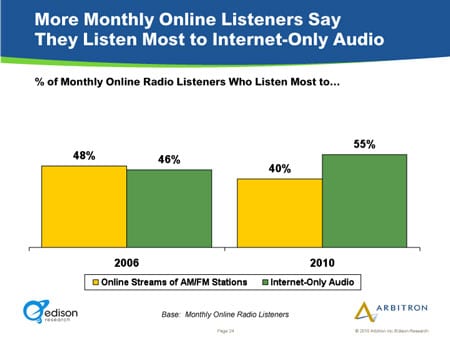