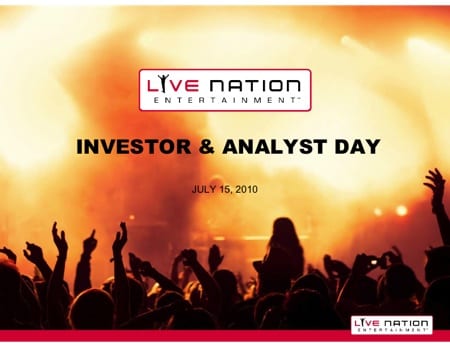 Ticket sales for Live Nation’s top 100 tours slid 9 percent to $822 million in the first half of 2010, and the year’s second half isn’t looking much better, expected to fall as much as 15 percent. The entire touring industry has taken a 17 percent hit so far this year.

Live Nation gave the bad, but not unexpected, news to investors at a New York meeting yesterday (7/15), prompting an almost immediate reaction on Wall Street. LYV shares hit a low of 18 percent, and went on to close down 10.8 percent.

Live Nation Chief Executive Michael Rapino blamed the decline in ticket sales on a weak economy and also blamed the media for scaring artists out of touring.

According to the NY Post: Rapino interrupted the presentation saying, “We had a real buzz kill at about slide nine, when I saw the e-mails go out.” Slide nine showed data that had the two companies’ revenue flat between 2008 and 2009 at $5.5 billion and no data at all for 2010, a source told The Post.

Company Executive Chairman Irving Azoff, who appeared by video conference, said, “I’m hoping that what I’m seeing as all you guys e-mail back to your offices to dump the stock isn’t indicative of the fact we have a group of investors that are so shortsighted.”

Live Nation is also trying to get out of its agreement with TS Eventim, the ticketing software company it partnered with in 2007 in order to bring ticketing in house. The promoter is citing breach of contract, and TS Eventim denies the claim and says they intend to seek millions in damages.

The LA Times reports Live Nation’s future plans: Live Nation Entertainment promised that “dynamic pricing,” which would add numerous pricing tiers, would be more widely implemented in 2011.The company’s executives said they were months away from introducing a ticketing inventory system that can adjust prices in real time.

Think of the future of buying a concert ticket not too unlike that of buying an airline ticket, in which the price can go up or down in the days leading up to an event based solely on demand. Read more here.