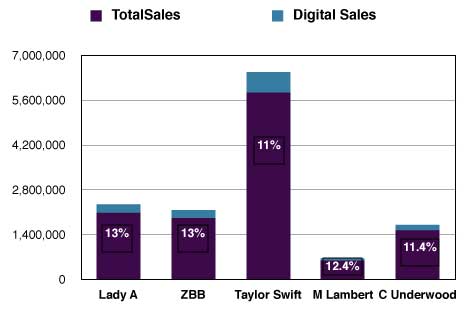 It’s not uncommon for debut week albums to sell 20% and more in digital format. But what happens to hit albums over the long term? Are country album sales compensating for shrinking shelf space at mass merchants by increasing their digital share? The answer is yes….and no.

Only five country artists placed in the Top 100 of the Current Digital Albums chart for the week ending 5/16/2010 (according to Nielsen SoundScan.) Using RTD (release to date) figures for both digital and physical album sales, the five top selling digital album country artists average 12-13% of sales in the digital format. Turned around, 87% of country sales remain in the physical format.

The fact that country consumers still strongly favor physical product is something for mass merchants to consider when planning inventory. Despite shrinking shelf space, country product is still a winning retail proposition.

For the week ended 5/16/2010—according to Nielsen SoundScan— country album sales are down 4.4% YTD, while all genre music sales are off 10% for the same period.