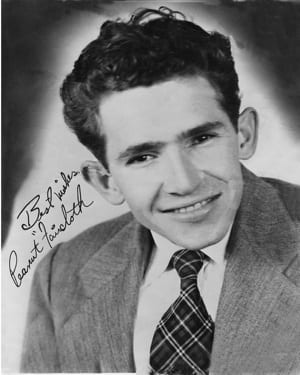 Born in Mitchell Country, Georgia, he had childhood polio which stunted his growth at 4’8.” This led to his nickname, “Peanut.”

He began his radio career at WNEX in Macon in 1946. While there, he also performed in a trio with future Hall of Fame members Boudleaux & Felice Bryant. His 1948-49 WNEX radio program, The Hoedown Party, was carried nationally via the Mutual Broadcasting System.

Country superstar Ernest Tubb heard him, brought him to Nashville and took him to Decca Records. Faircloth made his initial disc impact with a cover of Moon Mullican’s “I’ll Sail My Ship Alone” in 1950. Other Decca singles included “Mississippi River Blues” and “Coffee, Cigarettes and Tears.”

The broadcaster next moved to WRDV in Augusta, GA in 1951. He began recording for Bibletone Records with gospel singles such as “Pass Me Not.” His Augusta country band was The Hot Roasted Peanuts.

Faircloth wrote “Reindeer Boogie,” which Hank Snow recorded for his 1953 Christmas single. In 1994, Trisha Yearwood included it in her holiday collection The Sweetest Gift. The tune made the country charts in 1999 and led to a Gold Record award.

In 1954, Faircloth went to WLAY in Muscle Shoals, AL. While there, he hosted an early touring show by Elvis Presley. When he returned to Augusta, he brought the youngster’s debut single with him and became the first person in Georgia to broadcast Presley’s music. 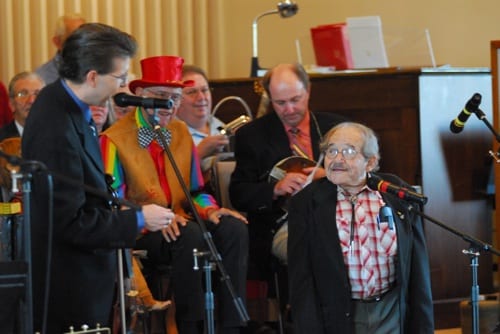 In 1955, he began performing with 10-year-old Brenda Lee. Their Saturday-afternoon broadcasts from a downtown record shop named in her honor, stopped traffic in Augusta. When Red Foley’s show came to town in early 1956, Faircloth talked the promoter into letting Brenda sing an opening song. Foley signed her to The Ozark Jubilee that night, which led to her recording contract and, eventually, to superstardom.

Faircloth moved to Chattanooga later in 1956. He became a mainstay of the city’s airwaves at various stations until his radio retirement in 1980. A singer plus a guitar, mandolin, washboard and harmonica player, he later worked for nearly two decades on The Southern Belle, a popular Chattanooga tourist riverboat. He was also the self-described master of the “flush-a-phone,” an instrument he created from a toilet plunger.

He performed for more than 20 years in the regional band Curtis Hicks & His Old Time Strings. In later years, Faircloth became a favorite emcee on the bluegrass-festival circuit.

Charles “Peanut” Faircloth was inducted into the Atlanta Country Music Hall of Fame in 2002 and is featured in an exhibit at The Georgia Music Hall of Fame. He was also saluted in Brenda Lee’s 2002 autobiography Little Miss Dynamite.

He is survived by Frances, his wife of 61 years, by four children, 11 grandchildren and nine great-grandchildren.