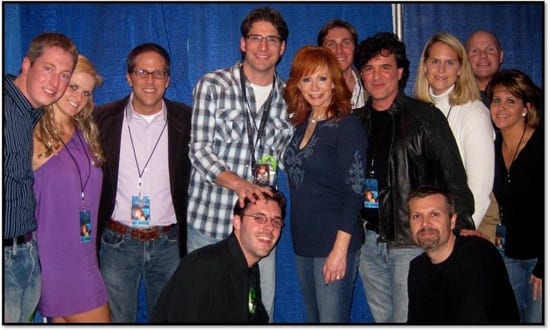 The George Strait/ Reba co-headlining tour opened in Baltimore over the weekend with special guest Lee Ann Womack. At the show Womack joined Reba onstage for a duet of her 1993 smash “Does He Love You.” Comedian Melissa Peterman, who costarred with Reba on her namesake sitcom, also made a special appearance.

Tickets to the Feb. 20 tour stop in Tulsa, OK went on sale Saturday (1/23) and were gone in less than an hour, marking the first time in the history of the Bank of Oklahoma Center that over 18,000 tickets have been sold for one event. It will be Strait’s first appearance in the city in more than 13 years.

Reba is celebrating her No. 1 hit “Consider Me Gone” with a party for industry friends today (1/25), and will join fans for a live video chat immediately afterward at 7 PM/CT. In more Reba news, she has launched a new line of fine gifts at Dillard’s called Studs & Stitches.