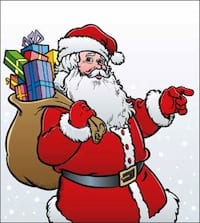 Santa’s sold-out annual tour has ended for 2009, but the SoundScan numbers continue on….for one more week that is. That’s right, in a move akin to a leap-year type calendar correction,  the 2009 SS reports will include 53 weeks instead of just 52.

All Genre Sales
Susan Boyle’s debut CD continued to churn, scanning over 510k units in this final Christmas shopping period. Mary J. Blige dropped a new final week release  and reaped 330+k units landing in the No. 2 spot behind Boyle on the Top 200 Albums chart. Nashville’s Swift (224+k) and Underwood (153k) filled out the Top 200 Top 10 at No. 5 and No. 8 respectively. (Handicappers betting on the race between Swift and Boyle for highest selling CD of the year will have to wait one more week. Current stats are Swift 3.157 million, Boyle 2.97 million.) Source: Nielsen SoundScan a division of The Nielsen Company

The Current Country Top 75 saw Lady Antebellum (84k), Tim McGraw (67k) and Zac Brown Band (62+k) filling out the No. 3, 4 and 5 places after Swift and Underwood, of course. Miranda Lambert’s Revolution is gaining momentum entering the Top 10 at No. 9 (40+k), a 20% gain over the previous week. Lambert’s release has scanned almost 334k units in 13 weeks showing strong career progress. (Her last CD, Crazy Ex Girlfriend took 41 weeks to get to the same total sales position, on 2/10/2008.)

Digital Tracks
On the digital tracks chart Lady Antebellum’s “Need You Now” continues its reign as the top country track download. This week tracks jumped 125%. Action will again focus on the tracks arena as holiday gift cards and hardware result in an expected track sales surge for the final year-end week. Warner Music’s stocking stuffer strategy seems to be paying off —Blake Shelton’s “Hillbilly Bone” lodged itself at No. 79 with almost 50k downloads making it the Top country track debut of the week.

With one more week added into the mix it appears that country music sales will end the year pretty close to flat, stay tuned for the final wrap….