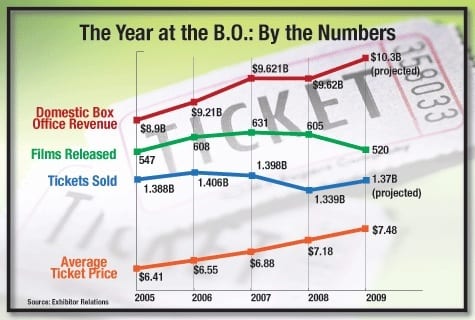 Hollywood is on track for its biggest year ever. TheWrap.com reports that domestic box office receipts will zoom past the $10 billion mark for the first time in history by the end of 2010. It’s surprising news considering the recession and the fact that there were almost 20 percent fewer films released in 2009 than in 2008.

Working in the film industry’s favor in 2009 is an increase in ticket prices and an increase in ticket sales. The average ticket price was up 4.2 percent to about $7.48 this year, pushed upward by numerous 3D movie releases which demand a higher cost per ticket. Also boosting the box office were popular franchises and sequels. And some Hollywood leaders believe that the recession helped, not hurt.

The economic downturn also effected the number of movies released this year, with some executives telling TheWrap that it created a barrier to entry for smaller indies and that major studios exercised more discretion.

With three full weekends left in 2009, total domestic theatrical distribution revenue stands at $9.64 billion [Exhibitor Relations], besting the previous full-year record of $9.621 billion set in 2007. Big releases still to come include The Princess and the Frog, Avatar, Alvin and the Chipmunks sequel and Sherlock Holmes. Exhibitor Relations predicts the year-end total will rise to $10.3 billion, while Hollywood.com estimates $10.6 billion.