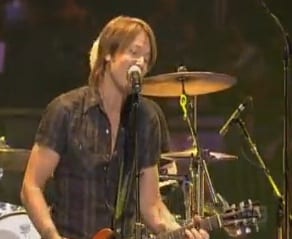 Keith Urban at the Aria Awards

Keith Urban opened Australia’s Aria Awards over the weekend with a performance of his hit “Kiss A Girl.” Next up he launches his “Escape Together World Tour” in Melbourne, Australia on Dec. 11. The entire production set-up used on the U.S. leg of the tour—two stages, lighting, video screens, etc.—will make its way across the Pacific Ocean to Australia in time to be assembled for the tour’s debut.

Immediately following his appearance on The American Music Awards, and his win there for Best Male Country Artist, Urban flew to Sydney, Australia for the Aria Awards, which are the Australian equivalent to the Grammys.