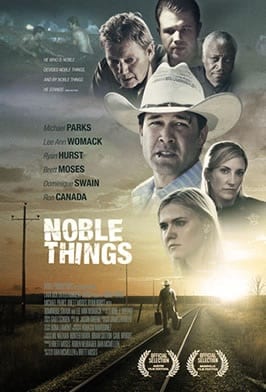 New movie Noble Things features an appearance by Lee Ann Womack and a Clay Walker-produced soundtrack with offerings from numerous Country artists. The film opened in select theaters Oct. 30 and the soundtrack is available via iTunes and other digital outlets.

Walker’s EL Music released the soundtrack which contains 14 never before heard songs from the EL Music catalog. Together with Noble Things supervising music producer, songwriter and fellow Texas native, M. Jason Greene, Walker co-wrote and recorded the song “Double Shot of John Wayne,” which appears in the film. Their collaboration also resulted in the song “A Lotta Good Beer Went Down,” which appears on the soundtrack performed by Tracy Byrd and Zona Jones. Elsewhere on the album are Country mainstays such as Tracy Lawrence, Mark Chesnutt, and Pam Tillis, joined by up-and-comers Bo Bice, Lane Turner, The Drew Davis Band, Dobie Gray, The Rachels, Blaine Larsen, Nikki Williams, Brock Goodwin and Jenny Gill.

Walker is also working a new studio album for longtime label home Curb Records. The lead single, “She Won’t Be Lonely Now,” will be out in December, with the album to follow in 2010.