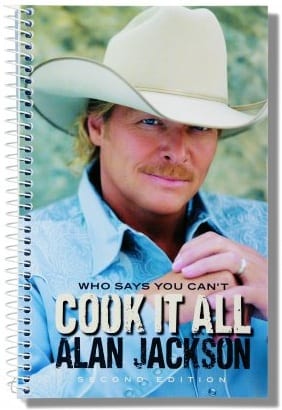 Alan Jackson's cookbook is part of his new line at Cracker Barrel.

Alan Jackson is headed for a home cooked breakfast at Cracker Barrel in Mt. Juliet on Mon., Nov. 2 to celebrate the release of his new line of merchandise at the store. He will be there greeting fans and autographing items. Included in the Alan Jackson Collection are more than 40 products ranging from a rocking chair, to apparel, to food and collectibles. There is also a new CD—Songs Of Love And Heartache, with hits and two previously unreleased songs.

The Alan Jackson Collection is the first time Cracker Barrel has developed a complete line of merchandise around a star. Jackson was involved in its creation and approved all the goods based on what he thought would appeal to his fans. The popular restaurant and retail concept has been growing its business as a non-traditional music retailer since 2003.

Jackson will be there on Nov. 2 from 9-11 AM. Fans can begin lining up at 6 AM to obtain numbered tickets for a place in line. First come, first served.