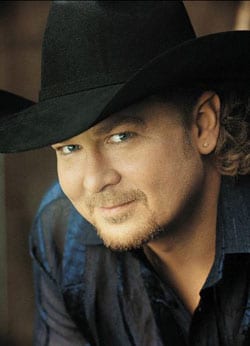 Suffering from a respiratory infection, Tracy Lawrence was hospitalized yesterday in Nashville. He has been diagnosed with early signs of pneumonia and is receiving treatment. He was forced him to cancel his August 13 appearance at the Wildhorse Saloon in Lufkin, TX. The status of his remaining shows this weekend in San Antonio, TX and Norman, OK will be determined early Thursday.

Darius Rucker is the latest addition to LongHorn Steakhouse’s “Live at LongHorn” country music program, in partnership with Coke Zero and Capitol Records Nashville. An accompanying “Tee Off & Tunes with Darius Rucker” will giving LongHorn diners a chance to win backstage access to a private concert and VIP tickets to this year’s The Tour Championship presented by Coca-Cola.

Clint Black is an executive producer for a new TV anthology series, American Storytellers, from ITV Studios, Sony/ATV Music Publishing and Roberts/David Films, according to Variety. The article says it will “take current and classic country music songs and turn them into drama episodes for TV.” Producers are seeking other artists to get involved in front of and behind the camera. A network home hasn’t been secured.
——————————-
Sony Pictures and Sony Music are releasing a Michael Jackson film, This Is It, to theaters on Oct. 30. It will include rehearsal and behind-the-scenes footage of the late singer preparing for his upcoming concert series, as well as interviews with some of his closest friends and creative collaborators. The film is captured in high definition and will also offer select sequences in 3-D…. Also, a major MJ tribute concert will be held on the grounds of a palace in Vienna next month. The organizer, World Awards Media GmbH, told the Associated Press to expect global television distribution of roughly one billion.
——————————-
Jason Aldean’s hit “She’s Country,” and its songwriter Bridgette Tatum (co-writer with Danny Myrick) were mentioned in the “Nancy”® comic strip yesterday (8/11). The strip can be viewed in over 350 U.S. newspapers and runs in approximately 80 countries. Says Tatum, “It just so happens that a lady once told me, ‘I’ll see you in the funny papers’…since then, I close my show with that quote. How ironic it came true!” She is currently on tour supporting her first single, “I Like My Cowboys Dirty.”

——————————-
iPhones Go Country: Emerson Drive just joined the growing list of music artists with an iPhone Application. Officially available today, it is free in the App store and contains more than 30 videos including live performances, episodes of E-Drive TV, and music videos, lots of band photos, more than 40 songs available for streaming, blog messages from the band, games and much more.

Big Kenny is giving fans a chance to win his iPhone and an 8GB custom flash drive at www.bigkenny.tv, where they can also download the free single, “Long After I’m Gone.” It is from the Oct. 27 release, The Quiet Times of a Rock and Roll Farm Boy and was written by Big Kenny, Marc Beeson and Richie Supa, and produced by Big Kenny and Chris Stone.

——————————-
Acclaimed bluegrass quintet Steep Canyon Rangers will launch a new tour and new album this fall. In September they will embark on a 15-city tour with Grammy® and Emmy® winning actor, comedian and musician Steve Martin. The Rangers will release their fourth studio album for Rebel Records, Deep in the Shade, on October 6. That day they will perform with Martin at world-renowned Carnegie Hall and on ABC’s The View. The tour will make a October 11 stop at the Ryman Auditorium.

Jack Ingram and his band can be seen performing on Lifetime’s hit show Army Wives this weekend. In the episode airing Sunday, Aug. 16, he will be the house band at the local bar, singing his latest single “Barefoot And Crazy.”