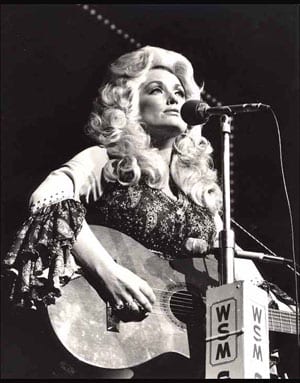 A four-CD box set simply-titled Dolly, will debut Oct. 27. Comprising 99 songs, it is the first multi-CD, multi-label deluxe box set compilation ever to represent her life’s work and will be released through RCA Nashville/Legacy, a division of Sony Music Entertainment.

Dolly Parton is distinguished for having charted at least one Top 5 country hit in each decade since the ’60s. She has also charted at least one #1 country hit (if not a dozen) in each decade from the ’70s to the 2000’s: “Joshua,” “Jolene,” “I Will Always Love You,” “Here You Come Again,”  “Starting Over Again,” the Grammy Award-winning “9 To 5,” “Islands In The Stream” (with Kenny Rogers), “Tennessee Homesick Blues,” “Why’d You Come In Here Lookin’ Like That,” “Rockin’ Years” (with Ricky Van Shelton) and “When I Get Where I’m Going” (with Brad Paisley).

Dolly continues to explore the broad range and depth of her recording career – from the rarely-heard sides cut at age 11 for the Louisiana-based Goldband indie label, and at age 16 for Mercury in Nashville, through her whirlwind two years (and first chart records) with Monument (1965-67), her record-setting near two-decade stay with RCA Records (1967-85, underpinning her long hitmaking association with Porter Wagoner), and another near-decade at Columbia into the ’90s. In addition, seven previously unreleased tracks make their historic debuts on this box set, as well as 11 of Porter and Dolly’s hit duets. The set is also available for pre-order at www.shopdolly.com.