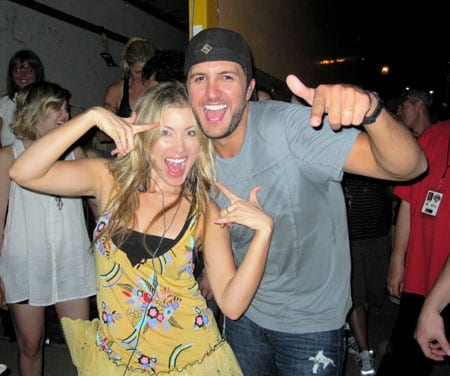 Sarah Buxton opened for Luke Bryan last month at the WGKX Kix on Beale show in Memphis. Buxton later joined Bryan onstage to sing the last two songs with him.

Capitol Nashville recording artist Luke Bryan and zooppa.com have joined forces to host a fan generated online video contest for Bryan’s latest single “Do I,” launching on Aug. 17 and continuing through Oct. 11. Zoopa.com is a social network focused on user-generated advertising. Fans can win autographed copies of Bryan’s soon to be released album Doin’ My Thing, due in stores Oct. 6, and cash prizes by clicking here.

New country trio Due West now has their own iPhone application which allows fans to watch videos, browse photos, sample music, read blog posts and latest news, and more. The group is gearing up for the release of their debut album later this year. They recently shot their first video for “I Get That All The Time” which has just been added to GAC.

Wrangler and The Parks are partnering to give fans the chance to register to win one of twenty autographed advance CDs or a grand prize consisting of a Wrangler gift certificate, autographed guitar and autographed copy of the father/son duo’s CD, Born Into It. In addition, fans can preview the record and download free Wrangler/The Parks desktop wallpaper here.

American Roots Records group TelluRide wrapped up their west coast radio and concert tour on Sunday. A two-night stint headlining the Tenino Wine and Music Festival raised $24,000 for the local Veterans of Foreign Wars organization. The group is now trekking back across the country for several dates throughout New York this week. The four-man-band wrap up the week at the Watkins Glen race track on Saturday and singing the national anthem live on ESPN prior to the NASCAR Sprint Cup road race. The band’s Ricky Schroder-directed music video for the debut single, “Pencil Marks,” was completed last week and will begin hitting television and internet airwaves in the next couple of weeks.

Country/hip-hop singer Colt Ford is teaming up with NASCAR for the release of a new single, “Racin’ The Way It Ought’a Be,” which is part of the racing-themed CD, Bristol Nights: The Official Music of Bristol Motor Speedway. The 12-song compilation is available on iTunes and Amazon. Bristol Motor Speedway hosts its next NASCAR weekend on Aug. 21-22 where more than 160,000 fans will flock to Thunder Valley.