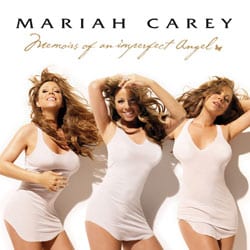 Advertisements are coming to liner notes near you. Mariah Carey’s Memoirs of an Imperfect Angel, set for release on Sept. 15, contains a 34-page mini magazine as the CD booklet. It was co-produced with Elle magazine and will include the usual liner notes and lyrics, as well as ads from Elizabeth Arden, Angel Champagne, the Bahamas Board of Tourism and more. Hypebot says WalMart will display the CD and Carey’s signature Arden fragrance together in the music aisle, as well as in the beauty department.

“The idea was really simple thinking: ‘We sell millions of records, so you should advertise with us,’” Antonio “L.A.” Reid, chairman, Island Def Jam Music Group told Brandweek. “My artists have substantial circulation—when you sell 2 million, 5 million, 8 million, that’s a lot of eyeballs.”

When Twitter went down yesterday, it was because a group of Russians were trying to stop a blogger from the Republic of Georgia from communicating with sympathizers, reports the Telegraph. The denial of service attack also interrupted Facebook and LiveJournal. The Telegraph says, “This technique uses a network of tens of thousands of compromised computers, known as a botnet, to flood a website’s servers with access requests, leaving ordinary traffic unable to get through, and causing the system to overload and crash.” Max Kelly, chief security officer at Facebook, corroborated the story to CNET News.

Although The Nashville Symphony doesn’t even charge tax, it is joining in the Sales Tax Holiday festivities this weekend (Aug. 7-9) by offering a 9.25% discount on all SunTrust Classical Series concerts. You can redeem this discount online by using the promo code TAXFREE, over the phone at 615-687-6400 or by visiting the box office in person. www.nashvillesymphony.org