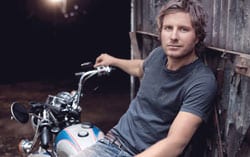 Dierks Bentley’s annual “Miles & Music For Kids” fundraiser is expanding beyond Nashville with the help of CMT One Country. The motorcycle ride and concert featuring Bentley and friends will grow to include six markets in 2009 and 2010, with proceeds benefiting Children’s Miracle Network hospitals. As part of CMT’s involvement, “Miles & Music For Kids” and Children’s Miracle Network will be promoted on all of its media channels—on-air, online and via radio.

The series of events will take place in Phoenix (Bentley’s hometown), Seattle, Atlanta, Dallas, Chicago, and, of course, Nashville. Each fundraiser will benefit the Children’s Miracle Network hospitals in that area. The 2009 kick off fundraiser will be held at Nashville’s Riverfront Park on Sunday, October 11 and, as always, will benefit the Monroe Carell Jr. Children’s Hospital at Vanderbilt, which is part of the Children’s Miracle Network.

“Miles & Music For Kids” began in 2006 in Nashville and since that time has raised more than half a million dollars for Vanderbilt’s Children’s Hospital.